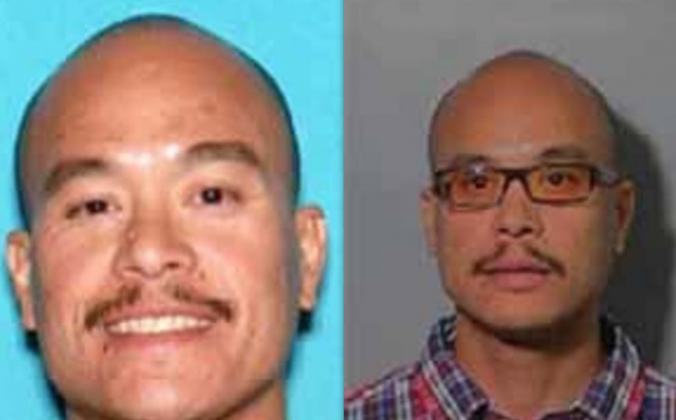 A man on the FBI’s most wanted list for allegedly killing his pregnant girlfriend has been taken into custody.

Philip Patrick Policarpio, 39, is accused of shooting his girlfriend at a residence on North Virgil Ave., Los Angeles, on April 12. He had gotten into an argument with her and had repeatedly punched her before shooting her, the police said.

He was caught trying to cross to the United States from Tijuana, on the southern border.

Policarpio—who had the nicknames “Bugsy,” “Sinister,” and “Sins”—had been on parole for an unrelated attempted murder at the time, and had shot a car full of people in 2000. He had been released from prison in 2014 after serving a 14-year sentence.

“His pattern is one of violence, and he is always armed,” FBI Special Agent Scott Garriola said earlier this month, the LA Times reports. “He is the definition of a continuing threat to the community.”

The LA Times has more about the alleged killing of his girlfriend:

“According to authorities, Policarpio and his live-in girlfriend, Lauren Elaine Olguin, attended an April 12 gathering at a friend’s home in the 500 block of North Virgil Avenue in East Hollywood.

He stormed into a room where Olguin, 32, was playing cards and became angry, officials said.

Policarpio started beating her on the head with his fists, according to a U.S. District Court criminal complaint. He then pulled out a handgun and shot Olguin once in the forehead, authorities said, killing her. She was pregnant.”

The FBI said it would provide more information about his capture on Tuesday.