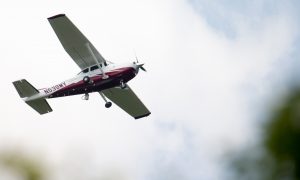 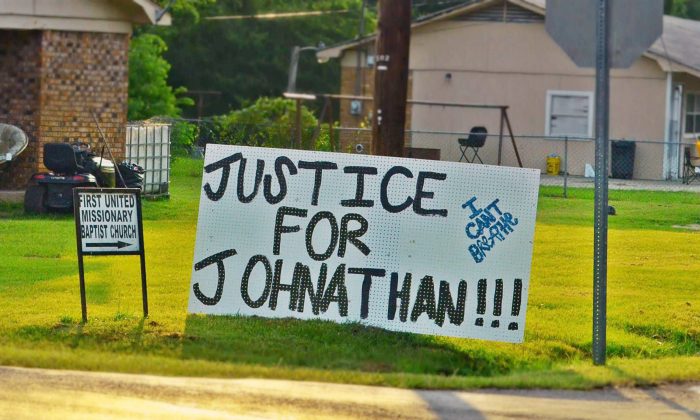 In this July 11, 2015 photograph, sign of support for Jonathan Sanders, a black man who is believed to have died after a physical encounter with a white police officer, hangs on a corner in Stonewall, Miss. (Jennifer Bozeman/The Clarke County Tribune, via AP)
US

STONEWALL, Miss.—Some residents of a small Mississippi town say they’re still looking for answers a week after a black man died following a physical encounter with a white police officer.

The Mississippi Bureau of Investigation said Tuesday that it is too soon to discuss how Jonathan Sanders died on the night of July 8 while he was exercising a horse on a two-wheeled buggy.

But local officials told a community meeting in Stonewall on Tuesday that the state and the FBI could hold a news conference in coming days to fill in some of the gaps in the official account Sanders’ death.

Clarke County District Attorney Bilbo Mitchell, though, told a crowd of about 60 gathered Tuesday at Stonewall’s town hall that it is too soon to say.

“I assume there may be some who may be wondering why there hasn’t been an arrest,” Mitchell said. “That’s because the investigation isn’t complete.”

During the meeting, attendee Carol Doby and others questioned Mitchell, who limited his comments to the procedural elements of the investigation.

“We just want answers and want to know why,” Doby said.

Over the weekend, hundreds of people gathered in Stonewall to honor Sanders’ memory and protest his death.

Mitchell said the case would be presented to a Clarke County grand jury, possibly as early as September, but maybe later. He said he has presented fewer than 15 cases involving a death caused by law enforcement to a grand jury during his 28 years as district attorney of four counties, and can’t recall an officer ever being indicted.

In order to arrest the officer under Mississippi law, Mitchell would have to prove probable cause to a judge because Herrington is a government employee.

Stonewall Police Chief Michael Street said he has turned the inquiry over to the Mississippi Bureau of Investigation, as is typical when a police officer is involved in someone’s death in Mississippi.

Warren Strain, the spokesman for MBI, said an autopsy has been completed and that Sanders’ body has been returned to his family. He said MBI has notified the FBI, which he described as “offering support.”

Strain said autopsy results are being analyzed and he can’t release a cause of death. Street and Mitchell said MBI is likely to hold a news conference in coming days to discuss the autopsy’s findings.

Strain described the encounter between Herrington and Sanders as a physical “altercation.”

Stonewall police don’t currently have video cameras mounted on police cars or worn by officers. But there are multiple witnesses to Sanders’ death in a residential neighborhood, including the officer’s wife, who was riding in the police car, Strain said. Lumumba’s firm is representing multiple additional witnesses, Lumumba and Strain said.

Stonewall’s two-block downtown is dominated by the decaying hulk of a red-brick cotton mill that drove the town’s economy for more than 100 years before closing in 2002 and laying off more than 800 workers.

Now, many residents work in Meridian, 20 miles to the north. As in surrounding Clarke County, about a third of Stonewall’s residents are black, while two-thirds are white.

The police department comprises Street and nine part-time officers, with one to three officers typically on duty, the chief said. He said Herrington is on unpaid leave, because as a part-time employee, he is only paid for hours worked. Herrington had been a Stonewall officer for more than two years.

“We cannot be more proud of our community, in the way we conducted ourselves,” Street told the meeting Tuesday.

Lumumba said a funeral is scheduled Saturday in Quitman, the Clarke County seat.