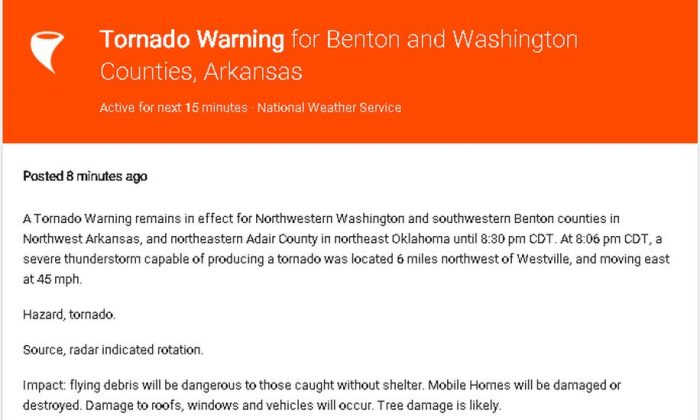 A tornado warning was issued for Fayetteville, Arkansas, on Wednesday night. (Google alerts)
US

A tornado warning was issued for Fayetteville, Arkansas, on Wednesday night.

The National Weather Service issued a warning at around 8:06 p.m. CDT. It says:

A Tornado Warning remains in effect for Northwestern Washington and southwestern Benton counties in Northwest Arkansas, and northeastern Adair County in northeast Oklahoma until 8:30 pm CDT. At 8:06 pm CDT, a severe thunderstorm capable of producing a tornado was located 6 miles northwest of Westville, and moving east at 45 mph.

Impact: flying debris will be dangerous to those caught without shelter. Mobile Homes will be damaged or destroyed. Damage to roofs, windows and vehicles will occur. Tree damage is likely.

People in the area should go to a shelter immediately or take cover now.

The Service says: “Take cover now. Go to a designed shelter such as a safe room or storm cellar if available. Otherwise, move to an interior room on the lowest floor of a sturdy building. Avoid windows. If seeking shelter in a basement, be sure to get beneath something sturdy. If in a mobile home, a vehicle or outdoors, move to the closest substantial shelter and protect yourself from flying debris.”