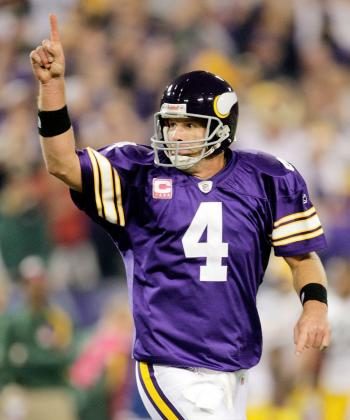 Brett Favre is now the only QB in NFL history to have beaten all 32 NFL teams. ( Jamie Squire/Getty Images )
NFL

Monday night’s game between the Minnesota Vikings and Green Bay Packers had all the makings of a historic football matchup.

The unbeaten Vikings were hosting their nemesis the Green Bay Packers in the loud and intimidating Metrodome, led by the very man who made the Packers the franchise they have become, No. 4 Brett Favre.

The Vikings’ 30–23 win over the Packers could have been the most hyped Week 4 football game of all time. And the game lived up to the hype, with Favre playing one of the cleanest games he ever has, going 24–31 for 271 yards and three TDs. It was his 66th game of three or more TDs.

Favre also added a new record to his resume; he is now the only QB in NFL history to have beaten all 32 NFL teams.

There was a buzz in the air well before the game began, with speculation on how the highly emotional Favre would handle facing his former team.

Favre maintained all week that he was after the “W” and nothing else.

“My statement has been what I’ve done over my career,” Favre said after the game. “One game does not define my career, good or bad. I know what I’ve done and I’m proud of what I’ve done. I know I can play. I’m here to help this football team win and I wasn’t out to prove anything, I just wanted to do everything that it would take to win.

“It was sweet but it didn’t have anything to do with revenge. [The Packers] chose to go in a different direction, and we’ll play them again. We were fortunate enough to beat them tonight.”

He did concede that this wasn’t just any ordinary game for him, a fact that he appeared to downplay all week.

“I was about as nervous as I’ve ever been before a game. I didn’t think I would be. As the week progressed I felt fine, but when I got to the hotel yesterday it kind of dawned on me.

“I felt a lot like I did when my dad passed away. But both games I played well so maybe that [nervousness] is a good thing,” Favre said.

“I am emotional, but I’m always emotional,” he admitted.

But emotions aside, competition and love of the game are the characteristics for Favre. It’s what has driven him back now from two retirements.

“All it means is that we are 4–0, and I’m pretty proud of that,” Favre responded after being questioned on what Monday’s win meant to him.

There has been a lot of speculation on whether or not Favre can keep up the pace and not have a repeat of last season’s deterioration with the Jets.

Favre’s throwing arm has been holding up well this year after last year’s injury—in fact, he says it is back to full recovery and is feeling great.

He said the most telling sign of his strong arm was how he threw on an incompletion to Bernard Berrian; that bullet of a pass escaped through a tiny hole between Berrian’s hands.

“That is a throw I wouldn’t have even come close to completing last year,” he said.

“My arm feels great. It didn’t feel very good last year. I’m not going to make excuses. But my arm feels a lot better and I think it’s showing.”

When asked how he felt about his new record of having beaten all NFL teams, Favre responded in classic fashion: “I guess you have to be remembered for something.”

Vikings fans showed their support for No. 4 by standing well into the first possession and creating an atmosphere of pure sporting revelry all night long.

“Our fans were awesome tonight,” Favre said. “That place was rocking. And I know how it feels to be on the other side.”

“This dome is always a very difficult place to play. It was really loud from the first snap to the last, and we didn’t really execute as well as we could have,” he said in a post-game interview.

“[I played] below my expectations, definitely,” Rodgers said. “To have three possessions where you’re in their territory and come away with zero points, two of them are directly related to mistakes by myself, that’s disappointing.”

Still, credit needs to be given to Rodgers, who threw 26–37 for a career-high 384 yards and with two touchdowns despite a weak offensive line that allowed eight sacks—four of them from Jarred Allen.

Rodgers has increased his passing yardage every game this season. Granted, he is no replacement for Favre, but the rookie has showed that he can deliver under some of the most intense defensive pressure he has seen so far—and get up strong after taking a beating.

For the Vikings, it’s now looking like they have found the missing ingredient to win the Super Bowl. And an away win this Sunday against the 0–4 St. Louis Rams would give Favre one more personal record of his own: his first 5–0 season start.