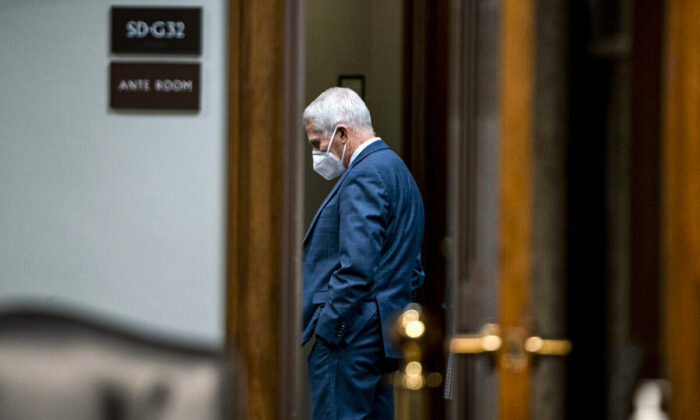 Jeff Carlson
Jeff Carlson co-hosts the show Truth Over News on Epoch TV. He is a CFA-registered Charterholder and worked for 20 years as an analyst and portfolio manager in the high-yield bond market. He also runs the website TheMarketsWork.com and can be followed on Twitter @themarketswork.
View profile
Follow
and Hans Mahncke

Hans Mahncke
Hans Mahncke co-hosts the show Truth Over News on Epoch TV. He holds LL.B., LL.M. and Ph.D. degrees in law. He is the author of numerous law books and his research has been published in a range of international journals. Hans can be followed on Twitter @hansmahncke.
View profile
Follow
biggersmaller
Print

Top U.S. health officials, including Dr. Anthony Fauci, scrambled in early 2020 to respond to public reporting of a potential connection between COVID-19 and the Wuhan Institute of Virology in China.

This response, which included a secret Feb. 1, 2020, teleconference, was loosely detailed in previously released and heavily redacted emails. Those emails strongly suggested that Fauci and a small group of top scientists sought to promote the natural origin theory, despite having evidence and internal expert opinions that pointed to the possibility of a leak from the Wuhan lab.

Unredacted versions of some of the emails made public by lawmakers on Jan. 11 further confirm this.

The newly unredacted emails, released by House Oversight Committee Republicans, confirm and illustrate a pattern of lies and coverup. From the emails, it appears the effort was spearheaded by Fauci himself but also involved his boss, recently retired National Institutes of Health (NIH) Director Dr. Francis Collins, as well as Jeremy Farrar, the head of the British Wellcome Trust.

It was previously revealed that at least two scientists, both of whom had received funding from the NIH, had told Fauci during the teleconference that they were 60 to 80 percent sure that COVID had come out of a lab.

The most significant new revelations in the unredacted emails come from two of these scientists, Robert Garry and Mike Farzan, who both noted the difficulties presented by the presence of a furin cleavage site in the COVID-19 virus—a feature that would later be cited as the defining characteristic of the virus.

‘Bothered by the Furin Site’

Farzan, an immunologist who in 2005 discovered the receptor of the original severe acute respiratory syndrome (SARS) virus, sent his post-teleconference notes to Farrar, who then shared them with Collins, Fauci, and Lawrence Tabak—top officials at the NIH. In those notes, Farzan wrote that he was “bothered by the furin site” and had difficulty explaining it “as an event outside the lab.” Farzan noted that it was theoretically possible the virus’s furin cleavage site could have arisen in nature but that it was “highly unlikely.”

The furin cleavage site is the defining feature that gives COVID-19 the ability to easily infect humans and has long been puzzled over by scientists, since no such site has ever been observed in naturally occurring SARS-related coronaviruses.

Farzan, like scientist Kristian Andersen, who has received funding from Fauci’s NIAID, works at the Scripps laboratory. As was already known from previously released emails, Andersen had privately told Fauci on Jan. 31, 2020 that the virus looked engineered. Andersen would later spearhead Fauci’s efforts to promote a natural origin narrative.

Farzan told the senior members of Fauci’s teleconference group that “a likely explanation could be something as simple as passage SARS-live CoVs in tissue culture on human cell lines” for an “extended period of time,” which could lead to the accidental creation of “a virus that would be primed for rapid transmission between humans.” This mutated virus would likely have specific “adaptation to human ACE2 receptor via repeated passage.”

A recent study in the science journal Nature noted that the COVID-19 virus was uniquely adapted to infect humans, as it “exhibited the highest binding to human (h)ACE2 of all the species tested.”

In layman’s terms, Farzan concluded that the pandemic likely originated from a lab in which live coronaviruses were passed through human-like tissue over and over, accelerating virus mutations with the end result being that one of the mutated viruses may have leaked from the lab. Farzan placed the likelihood of a leak from a Wuhan lab at 60 to 70 percent likely.

The emails indicate that Farzan was cognizant that the Wuhan lab conducted these types of dangerous experiments in Level 2 labs, which have a very low biosecurity standard. This fact was later admitted by the Wuhan lab’s director, Shi Zhengli, in July 2020. Notably, since the start of the pandemic, Farzan has received grants totaling almost $20 million from Collins’s NIH and Fauci’s NIAID.

‘Can’t Figure Out How This Gets Accomplished in Nature’

Further revelations in the newly unredacted emails came from Garry, another scientist funded by Fauci’s NIAID, who told the senior members of the teleconference group in no uncertain terms that “I really can’t think of a plausible natural scenario where you get from the bat virus” to COVID-19.

Garry cited the remarkable sequences that would have to occur naturally, telling the group that “I just can’t figure out how this gets accomplished in nature. Do the alignment of the spikes at the amino acid level – it’s stunning.” He noted that a lab-created virus would readily explain the data he was seeing, telling Fauci’s group that “Of course, in the lab, it would be easy to generate the perfect 12 base insert that you wanted.”

Along the same lines of what Farzan had said, Garry was telling Fauci’s group that it was extremely unlikely that the furin cleavage site could have evolved naturally, whereas creating it in a lab was easy.

The primary difference between Farzan’s and Garry’s view lies in whether the lab created the furin cleavage site through serial passage in human-like tissue or through direct insertion of the site. In either case, both scientists thought it was likely that the virus came out of the Wuhan lab rather than having originated in nature.

Garry’s privately stated view is even more remarkable because only a day earlier, on Feb. 1, 2020, Garry had helped to complete the first draft of the Proximal Origin paper that promoted the idea that the virus had originated in nature. That paper became the media’s and the public health establishment’s go-to evidence for a natural origin for the COVID virus.

It was published online on Feb. 16, 2020, and firmly excluded the possibility of a lab leak.

One of Garry’s co-authors for the Proximal Origin paper, Andrew Rambaut, also is cited in the newly redacted emails. In congruence with the other two scientists, Rambaut told Fauci’s teleconference group that he also was bothered by the unusual furin cleavage site. But unlike Garry or Farzan, he speculated that the virus might have arisen in another animal, a so-called intermediate host.

Two years later, no such host has been identified. In the case of the original SARS virus as well as the Middle East respiratory syndrome (MERS) virus, the intermediate host was found within a few months. Rambaut also recognized immediately the peculiar fact that the furin cleavage site “insertion has resulted in an extremely fit virus in humans—we can also deduce that it is not optimal for transmission in bat species.”

Rambaut lamented the lack of data being shared by Wuhan scientists and concluded that only the Wuhan Institute of Virology knew what had happened.

The day after these three scientists shared their views with the senior members of the group, on Feb. 3, 2020, Fauci attended a meeting at the National Academies of Sciences, Engineering, and Medicine (NASEM). That meeting had been urgently convened at the behest of White House Director of Science and Technology Kelvin Droegmeier, who wrote that he was seeking answers about the origins of COVID-19.

The meeting, which included a presentation by Fauci, was also attended by Peter Daszak–the person through whom Fauci had funded the Wuhan Institute of Virology–and Kristian Andersen. Fauci and his group promoted the natural origin theory to the Academy, despite having just been told on the teleconference and in subsequent emails that a lab leak provided the most likely explanation for the virus.

While they were pushing their natural origin narrative to NASEM, and by extension to the White House, Fauci and his group made no mention of their private discussions—which were taking place at the same time—that the virus most likely originated in a Wuhan lab.

The new emails fill some of the gaps left by previous redactions, but still only cover a small portion of the many emails that remain redacted. A close examination of the newly unredacted emails reveals that none of the usual justifications for redactions, such as private information about people or threats to sources and methods, apply. Instead, it appears that all of the redactions were made solely on the basis of shielding the NIH from scrutiny over its coverup of the virus’s origins.

These efforts at obfuscation tie in with the fact that we only found out about these new emails after a months-long battle between the Department of Health and Human Services (HHS), the parent organization of Fauci’s NIH and NIAID, and House Republicans.

In order to obtain this information, House Republicans were forced to avail themselves of a rarely used law from 1928, the so-called Seven Member Rule. Under this law, an executive agency, such as HHS, is required to provide requested information when requested by seven members of the House Committee on Government Operations (now called the Committee on Oversight and Reform).

It isn’t known why Republicans haven’t used this law earlier or with greater frequency.

Eventually, HHS allowed the House Republicans’ congressional staffers to view the unredacted emails in person. The staffers then transcribed what they saw, which is how we came to know about these new revelations.

These new emails are crucial in that they confirm that by Feb. 2, 2020, Fauci’s teleconference group had identified evidence pointing to a lab leak at the Wuhan Institute of Virology. These scientists knew that the virus’s unique furin cleavage site was very likely the result of experiments conducted at the Wuhan lab. Notably, they also knew that these experiments were being conducted in minimum biosecurity Level 2 labs.

These facts presented a major problem for the heads of the NIH, who had funded the experiments.

As the new emails confirm, their response was to cover up the lab leak evidence and push a natural origin narrative.

Then-NIH Director Collins, who would later call for the public “takedown” of the authors of the Great Barrington Declaration, asked his group for a “swift convening of experts” in order to prevent the “voices of conspiracy” from doing “great potential harm to science and international harmony…” through public discussion of a lab leak theory.

Collins’s view was mirrored by another participant in Fauci’s teleconference, Dutch virologist Ron Fouchier, who told the group that “Further debate about such accusations would unnecessarily distract top researchers from their active duties and do unnecessary harm to science in general and science in China in particular.”