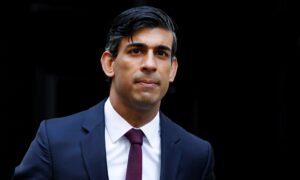 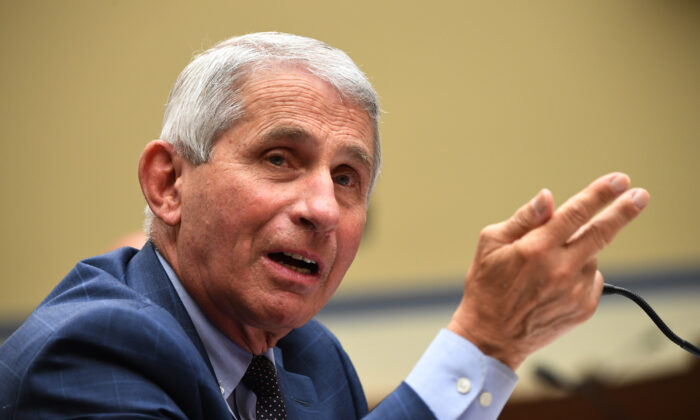 Dr. Anthony Fauci, director of the National Institute for Allergy and Infectious Diseases, testifies before a House Subcommittee on the Coronavirus Crisis hearing in Washington on July 31, 2020. (Kevin Dietsch/Pool/Getty Images)
US News

Anthony Fauci, a leading member of the White House pandemic task force, said on Monday that he does not recommend imposing a travel ban on the United Kingdom, where a new mutant strain of the CCP virus is prevalent.

During an interview with CNN, Fauci said the U.S. government should “without a doubt keep an eye” on the situation in the UK, but also not to “overreact.”

“Follow it carefully, but don’t overreact to it,” Fauci added.

British health officials warned over the weekend that the virus mutation “can spread more quickly” and was responsible for 60 percent of new infections in London. The European Centre for Disease Prevention and Control also said that preliminary analysis suggests the new variant is “significantly more transmissible,” although there is so far no evidence that it is more lethal.

Meanwhile, Admiral Brett Giroir, one of Trump administration’s top medical officials, said that the U.S. government won’t impose any travel restriction on the UK without consulting the experts.

“I think everything is possible. We just need to put everything on the table, have an open scientific discussion, and make a best recommendation,” Giroir told CNN.

Giroir also said he is “very encouraged” that this new variant of the CCP (Chinese Communist Party) virus is not going to compromise the vaccine’s effectiveness.

Fauci and Giroir’s comments come as more than 40 countries, ranging from France, Saudi Arabia, and Singapore, have banned UK arrivals because of concerns about the spread of the new CCP virus variant.

In the United States, New York Gov. Andrew Cuomo and New York City Mayor Bill de Blasio have both called on the federal government to impose travel restrictions on the UK.

“Why don’t we act intelligently for a change? Cuomo asked on Monday. “Why don’t we mandate testing before people get on the flight or halt the flights from the UK now? Many other countries have done this.”

British Airways has agreed to test all passengers boarding New York-bound flights at the request of Cuomo’s office. The governor has also called on Virgin and Delta to follow the lead and has threatened to take action if they refuse.