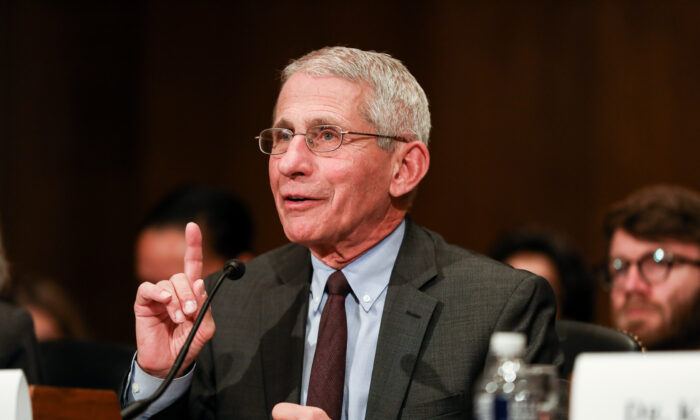 National Institute of Allergy and Infectious Diseases Director Anthony Fauci testifies at a Senate hearing regarding the coronavirus in Washington on March 3, 2020. (Charlotte Cuthbertson/The Epoch Times)

Top U.S. health officials, including Anthony Fauci, scrambled in late January 2020 to respond to public reporting of a potential connection between COVID-19 and the Wuhan Institute of Virology in China.

The insight into their response comes from examining more than 3,000 pages of emails belonging to Fauci, the director of the National Institute of Allergy and Infectious Diseases (NIAID), which were released under the Freedom of Information Act and provide a detailed timeline of events.

The emails suggest the officials were concerned about previous U.S. involvement with the lab, and that they had knowledge of public statements made by the Wuhan lab’s director about U.S. funding being used for controversial research conducted there.

Following the officials’ conversations, public discussion of the source being a potential lab leak was actively suppressed by social media platforms, health officials, and the World Health Organization (WHO).

Fauci received an email at 8:43 p.m. (p. 3229) on Jan. 31, 2020, from an associate, Greg Folkers of the National Institutes of Health (NIH), the federal agency responsible for public health research. The email contained no text and held only a single, lengthy article that had been published in the magazine Science that evening.

The article, authored by Jon Cohen, was one of the earliest stories that described how scientists were working frantically on “viral genomes” in order to “understand the origin of 2019-nCoV.”

The article focused on the theory that the virus originated in a Wuhan seafood market, and the author took pains to discount the lab leak theory, noting that the viral sequences “knock down the idea the pathogen came from a virology institute in Wuhan.”

However, the author did note that “concerns about the institute predate this outbreak,” and also detailed how a scientist “in 2015 criticized an experiment in which modifications were made to a SARS-like virus circulating in Chinese bats to see whether it had the potential to cause disease in humans.”

The experiment cited in the Science article was more fully detailed in a Nov. 9, 2015, article in the journal Nature about gain-of-function experiments—a process whereby viruses are deliberately made more virulent in order to predict emerging diseases—that were being conducted at the Wuhan lab using “chimeric viruses” in mice.

The article’s authors, including the director of the Wuhan lab, Shi Zhingli, noted that their research was initiated before the U.S. government introduced a moratorium on gain-of-function research. They added that their paper “has been reviewed by the funding agency,” and, crucially, that “continuation of these studies was requested, and this has been approved by the NIH.”

The article also noted that “research in this manuscript was supported by grants from the National Institute of Allergy & Infectious Disease,” the organization Fauci heads, as well as NIAID’s parent organization, NIH.

Two minutes later (p. 3,187), Fauci also forwarded the article to Jeremy Farrar, the head of a British nonprofit, and Kristian Andersen, a professor at Scripps Research, telling them: “This just came out today. You may have seen it. If not, it is of interest to the current discussion.”

Why Fauci chose to contact Farrar and Andersen, neither of whom worked for Fauci nor the NIH, isn’t clear but, in the following days, both became leading forces in efforts to dispel the lab leak theory. In March 2020, Andersen co-authored the highly influential paper “The Proximal Origin of SARS-CoV-2,” which remains widely cited as proof of natural origin. Andersen and his coauthors received funding from both NIH and Farrar’s organization.

Fauci also emailed the article to Robert Kadlec at the HHS Office of the Assistant Secretary for Preparedness and Response (ASPR), at 9:49 p.m. (p. 3,222), telling him: “Bob: This just came out today. Gives a balanced view. Best, Tony.”

At 10:32 p.m. (p. 3,187) that evening, Fauci received an email response from Andersen, who acknowledged receiving the article and noted an observation he made.

According to Andersen, “The unusual features of the virus make up a really small part of the genome (<0.1%) so one has to look really closely at all the sequences to see that some of the features (potentially) look engineered.”

Earlier in the day, however, Andersen had sent a tweet rebutting Sen. Tom Cotton’s (R-Ark.) theory that the virus could have stemmed from the Wuhan lab, saying: “The analyses are completely flawed and wrong. They can safely be ignored.”

The next morning—at 7:29 a.m. (p. 3,221) on Feb. 1, 2020—Fauci sent Hugh Auchincloss, NIAID’s principal deputy director, the 2015 Nature article that detailed the gain-of-function experiments and the funding by NIH. He included a strongly worded message, saying: “It is essential that we speak this AM. Keep your cell phone on.” Fauci directed Auchincloss to “read this paper as well as the e-mail that I will forward to you now.”

“You will have tasks today that must be done,” he wrote.

The Nature article was referenced indirectly in the recently published article by Cohen. Thirty-five seconds later (p. 3,215), Fauci followed up by sending Auchincloss the newly published Science article that had been forwarded to him the evening before.

In 2014, Fauci’s NIAID awarded a $3.7 million grant to the New York-based EcoHealth Alliance, headed by Peter Daszak. According to Francis Collins of NIH, some of the grant funds “went to Wuhan” as part of “a subcontract from EcoHealth.”

The Obama administration in 2014 had established a moratorium on gain-of-function research, because of its inherent riskiness. It’s likely that the 2015 research in the article forwarded to Auchincloss by Fauci would have been covered by the ban.

About two hours later, at 10:34 a.m. (p. 3,197), Farrar sent out a group email, announcing a 2 p.m. conference call. His email noted that “information and discussion is shared in total confidence and not to be shared until agreement on next steps.”

Included in the email was a brief agenda that included the items “Introduction, focus and desired outcomes” and “Summary and next steps.” Including Farrar, there were a total of 13 people listed on the teleconference agenda.

Shortly after Farrar’s email on the conference call, Auchincloss responded to Fauci at 11:47 a.m. (p. 3,206) under an email thread with the subject line of “Continued.” This email chain differed from the one that Fauci had initiated when he sent the two articles earlier that morning.

Auchincloss noted: “The paper you sent me says the experiments were performed before the gain of function pause but have since been reviewed and approved by NIH. Not sure what that means since Emily is sure that no Coronavirus work has gone through the P3 framework. She will try to determine if we have any distant ties to this work abroad.”

“P3 framework” refers to the HHS P3CO Framework (HHS Framework for Guiding Funding Decisions About Proposed Research Involving Enhanced Potential Pandemic Pathogens), which is used to guide HHS and NIH funding decisions. It appears that Auchincloss was disputing the contention from researchers at the Wuhan lab that the gain-of-function experiments had been approved.

At 1:13 p.m. (p. 3,197), Farrar sent another email relating to the pending 2 p.m. teleconference, saying: “Kristen and Eddie have shared this and will talk through it on the call. Thank you. Hope it will help frame the discussions.” Kristen appears to be Kristian Andersen, who is later referred to as KA.

Due to redactions, it isn’t known what Farrar was referring to as being “shared.”

At 1:43 p.m. (p. 3,172), Marion Koopmans, who oversees a Dutch lab that was previously involved with gain-of-function experiments, sent an email to Farrar and CC’d Fauci and other members of the call. The body of Koopmans’s email is fully redacted.

At the exact same time that Koopmans sent that email (p. 3,187), Fauci responded to Andersen’s email, which had previously noted that “one has to look really closely at all the sequences to see that some of the features (potentially) look engineered.” Fauci simply wrote: “Thanks, Kristian. Talk soon on the call.“

The teleconference ostensibly began at 2:00 p.m. as scheduled. At 2:56 p.m. (p. 3,172), during the teleconference, Farrar sent an email to four of the 13 individuals believed to be on the call, including Fauci, asking: “Can I suggest we shut down the call and then redial in? Just for 5-10 mins?”

The teleconference ends sometime after this point and before the next email, which is sent at 3:50 p.m.

The 3:50 p.m. email (p. 3,167), sent by Collins, appears to be referencing WHO head Tedros Adhanom Ghebreyesus, and states: “Hi Jeremy, I can make myself available at any time 24/7 for the call with Tedros. Just let me know. Thanks for your leadership on this critical and sensitive issue. Francis.“

Shortly thereafter, Farrar sent an email at 3:59 p.m. (p. 3,133) to the entire group, thanking them for their participation. Farrar noted: “There is clearly much to understand understand [sic] in this. This call was very helpful to hear some of our current understanding and the many gaps in our knowledge.”

A large redacted section then followed. Farrar closed by saying: “I hope that is a reasonable approach, please send any thoughts or suggestions. Once again, thank you for making time over a weekend and for such an informed discussion on a complex issue. Thank you and best wishes Jeremy.”

At 3:30 a.m. (p. 3,130), Ron Fouchier sent an email to unknown recipients, thanking Farrar for the “useful teleconference” and included a section titled “Ron’s notes.” The section of notes spans more than two full pages and is completely redacted.

Farrar responded to Fouchier, saying “Thanks Ron,” followed by a redacted paragraph. Farrar’s message closed with “Thoughts on that very welcome.”

Farrar then sent an email at 4:48 a.m. (p. 3,128) to Andrew Raumbaut and the other attendees of the teleconference group. Farrar noted that “this is a very complex issue.” This comment was followed by a long redacted section before Farrar closed with “I suggest we don’t get into a further scientific discussion here, but wait for that group to be established.”

“Let me know if I can help get through his thicket of protectors,” he wrote. The email was copied to Fauci and Tabak.

At 7:13 a.m. (p. 3,126), Collins sent an email to Farrar and CC’d Fauci and Tabak, noting, “Really appreciate us thinking through the options …” This entry is followed by a one-line redaction.

At 11:28 a.m. (p. 3,125), Farrar sent an email to Fauci and Collins, copied to Tabak. Farrar shared with the others: “Tedros and Bernhard have apparently gone into conclave … they need to decide today in my view. If they do prevaricate, I would appreciate a call with you later tonight or tomorrow to think how we might take forward.”

At the end of the email, Farrar added a reference to the online news site ZeroHedge, which had just published an article on the possibility that the coronavirus came out of a lab.

The day after Farrar’s message, ZeroHedge was banned from Twitter.

Although it isn’t known what WHO Director Tedros was told, or asked, on Feb. 3, 2020, he issued his “Report of the Director General,” which included a call to “combat the spread of rumours & misinformation.” Tedros also followed up with a tweet.

During his speech, Tedros announced: “We have worked with Google to make sure people searching for information about coronavirus see WHO information at the top of their search results. Social media platforms including Twitter, Facebook, Tencent, and TikTok have also taken steps to limit the spread of misinformation.”