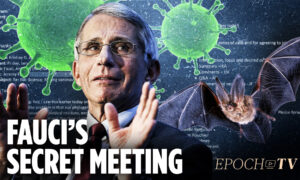 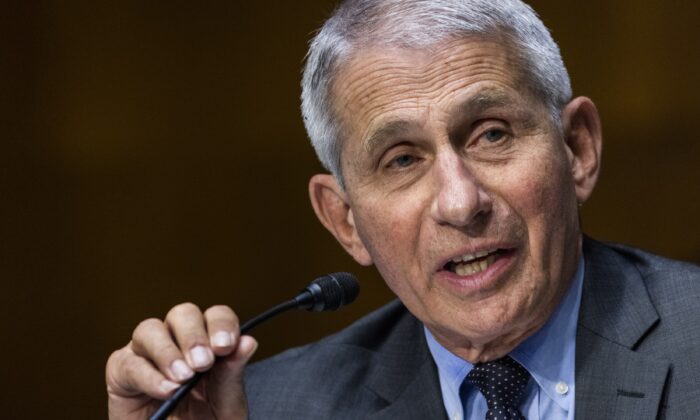 Fauci: Some on February 2020 Call Believed COVID-19 Was Possibly Engineered

Some of the scientists on a recently-revealed February 2020 phone call thought the virus that causes COVID-19 could have been engineered, Dr. Anthony Fauci, who convened the call, said in a new interview.

“It was a very productive back-and-forth conversation where some on the call felt it could possibly be an engineered virus,” Fauci, the director of the National Institute of Allergy and Infectious Diseases, told USA Today.

Others on the call believed evidence supported the theory that the CCP (Chinese Communist Party) virus emerged from nature.

Internal emails obtained by BuzzFeed News (pdf) through a Freedom of Information Act request show Fauci and others hopped on the call to discuss a document about the virus’s sequencing.

The main speakers were Kristian Andersen, a professor in Scripps Research’s Department of Immunology and Microbiology, Jeremy Farrar, director of the Wellcome Trust, and Edward Holmes, a virologist at the University of Sydney. The contents of what they discussed were redacted from the email.

“I remember it very well,” Fauci said. “We decided on the call the situation really needed to be looked into carefully.”

The call came in early February 2020, after Fauci and others scrambled to respond to a report outlining the possibility that the virus escaped or was released from a top-level laboratory in Wuhan, China, where the first COVID-19 cases were detected in late 2019.

Anderson had told Fauci and Farrar in an email on Jan. 31, 2020, that there were “unusual features” making up the virus, and that some of the features “(potentially) look engineered.”

Just a few days later, after the call, Anderson was telling fellow academics in an email that “the data conclusively show” that the virus was not engineered, according to an internal email (pdf) obtained by a U.S. nonprofit called Right to Know.

Anderson and Peter Daszak, a U.S. researcher whose group EcoHealth Alliance has sent funds to the Wuhan lab, began circulating articles that would be published in February 2020 dismissing the lab leak theory.

Andersen and three other scientists who were on the call later authored an article called “the proximal origin of SARS-CoV-2” that claimed the virus “is not a laboratory construct or a purposefully manipulated virus.”

Two of the people on the call also contributed to a letter published around the same time that alleged ideas about the virus not originating in nature were “conspiracy theories.”

Fauci publicly wrote off the possibility that the virus escaped from the Wuhan lab.

“The mutations that it took to get to the point where it is now is totally consistent with a jump of a species from an animal to a human,” he told reporters at the White House in April 2020.

“If you look at the evolution of the virus in bats and what’s out there now, [the scientific evidence] is very, very strongly leaning toward this could not have been artificially or deliberately manipulated,” he added to National Geographic the following month.

A number of members of Congress have called on Fauci to resign after the internal emails were released. They say the emails showed Fauci was giving conflicting messages about key issues, such as masking, and that he lied in some cases.

“He owes the American people a lot of answers, but he also owes the world a lot of answers,” Rep. Marjorie Taylor Greene (R-Ga.) said during a press conference this week while announcing a bill that would bring Fauci’s salary to zero and require the Senate to confirm someone to replace him.

“He has ignored the best advice from scientists in his very own science realm, in favor of fearmongering and theatrics. Egregiously, Fauci even knew that the virus likely originated from a lab in Wuhan, China. Now there are over 2,000 emails proving that Dr. Fauci’s ego got in the way of the facts over and over again,” added Dr. Paul Gosar (R-Ariz.).

Fauci has brushed off the criticism and the White House has stood by him.

”If you go back then, even though you lean towards feeling this is more likely a natural occurrence, we always felt that you got to keep an open mind all of us,” Fauci said on “CBS This Morning: this week. ”We didn’t get up and start announcing it, but what we said, ‘Keep an open mind and continue to look.’ So I think it’s a bit of a distortion to say that we deliberately suppressed that.”

“The February 1 telecon, appears to have played an important—probably crucial—role in establishing and enforcing that false narrative,” he added.

Andersen said in a now-deleted tweet that “we seriously considered” the lab leak theory. “However, significant new data, extensive analyses, and many discussions led to the conclusions in our paper,” he said.

Farrar told The Epoch Times via email that “in my view, the most likely scenario is that the virus crossed from animals to humans and then evolved in humans.”

“The best scientific evidence available to date points to this,” he said, adding that “we must stay open-minded while efforts continue to gather and share the evidence needed.”

Some of the scientists who earlier insisted a lab leak wasn’t possible have since dramatically altered their position.

Dr. W. Ian Lipkin, for instance, who was listed as a co-author of Anderson’s article, told The New York Times in May that the theory “must be considered.”

Dr. Peter Palese, a microbiologist at the Icahn School of Medicine at Mount Sinai Hospital, who co-authored the other article, said he now believes “a thorough investigation about the origin of the COVID-19 virus is needed.”