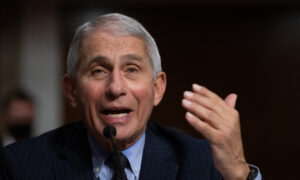 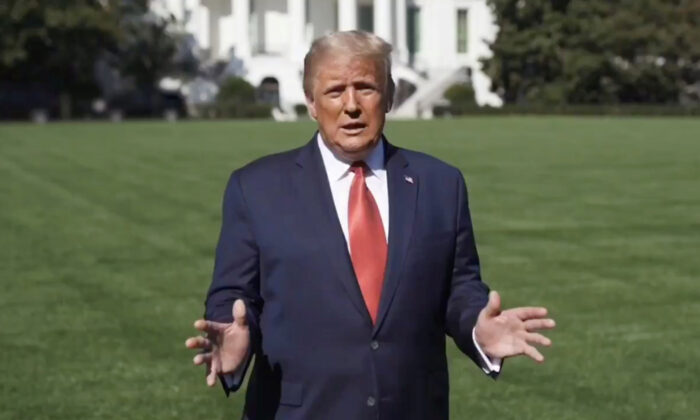 President Donald Trump speaks outside the White House, where he is being treated for COVID-19, in Washington, in this still image taken from social media video released on Oct. 8, 2020. (@realDonaldTrump via Reuters)
Trump Administration

“He certainly looks good and apparently feels good,” Dr. Anthony Fauci, director of the National Institute of Allergy and Infectious Diseases, who is not involved in Trump’s care, said during a virtual appearance on MSNBC after being asked to analyze the president from afar.

“One of the issues that we all have to be aware—and his physicians are aware of this—that the history of COVID-19 is that you could look and feel like you’re doing reasonably well, and after a couple of days you could have a downturn, namely have a reversal. That’s possible,” he added. “The chances of that happening, I don’t know. As good as he looks, I don’t think that’s going to happen, but I don’t know. But you have to be heads-up that it might happen.”

Dr. Sean Conley, Trump’s doctor, said in a memorandum on Oct. 8 that Trump has “responded extremely well to treatment.”

Saturday will be 10 days since the Oct. 1 diagnosis. Based on the trajectory of the treatment, Conley said he expects Trump to safely resume public engagements that day. Trump is mulling holding a rally in Florida on Saturday.

Trump said on Fox Business on Thursday, in his first interview since his positive test, that he felt well enough to do a rally earlier than that.

“I wanted to do one last night. But I think I’m better to a point that I feel better than I did, you know, I jokingly said 20 years ago. I feel perfect. There’s nothing wrong,” he said.

Trump touted the Regeneron antibody cocktail he received for his quick recovery, calling it “a gift from heaven.” The cocktail is aimed at boosting the immune response system to COVID-19, a disease caused by the CCP (Chinese Communist Party) virus.

Preliminary data from testing of the cocktail are favorable but full clinical trials are required to prove it works, Fauci said in his interview.

The Centers for Disease Control and Prevention (CDC) recommends COVID-19 patients wait 10 days from symptom onset before going out and about, as it takes that long in some cases to become non-infectious. Another recommendation is to test negative twice across 24 hours before leaving isolation.

“So if the president goes 10 days without symptoms, and they do the tests that we were talking about, then you could make the assumption, based on good science, that he is not infected,” Fauci said. “But you have to wait and make sure you go through those particular benchmarks that are delineated in the CDC guidelines.”