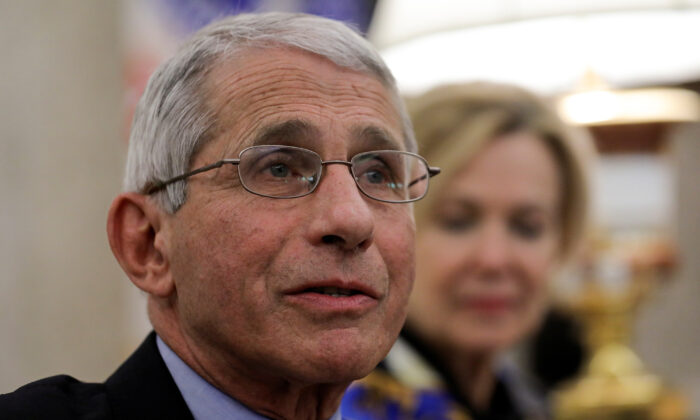 The infectious diseases expert said there is no evidence that hydroxychloroquine is effective against the CCP virus, but he did not call for an outright ban on the medication.

National Institute of Allergy and Infectious Diseases Director Anthony Fauci, a member of the White House’s task force on the virus, said the anti-malarial drug isn’t effective, based on the available data.

“The scientific data is really quite evident now about the lack of efficacy,” Fauci told CNN on Wednesday morning.

President Donald Trump earlier this month announced that he was taking the drug along with zinc as a preventative measure against the CCP (Chinese Communist Party) virus, a novel coronavirus. The president later said in an interview that he’s no longer taking the medication and added: “And by the way, I’m still here. To the best of my knowledge, here I am.”

Fauci said that evidence shows there is a chance that hydroxychloroquine can cause irregular heart rhythms.

“There was suspicion of that for a while, but as data comes in, it becomes more clear,” he said, adding that people should not assume that the drug is a “knockout” against COVID-19, noting that clinical evidence on its effectiveness is lacking.

In May, the National Institute of Allergy and Infectious Diseases announced a 2,000-patient survey to find out whether the drug is effective at preventing hospitalization or death from the CCP virus.

“Although there is anecdotal evidence that hydroxychloroquine and azithromycin may benefit people with COVID-19, we need solid data from a large randomized, controlled clinical trial,” Fauci said in a statement at the time.

The World Health Organization (WHO) this week temporarily suspended testing hydroxychloroquine in COVID-19 patients due to safety concerns.

WHO Director-General Tedros Adhanom Ghebreyesus said during a briefing that WHO’s s trial of hydroxychloroquine would be put on hold for a safety review.

“The executive group has implemented a temporary pause of the hydroxychloroquine arm within the Solidarity Trial while the safety data is reviewed,” the WHO chief said.

It came weeks after the Food and Drug Administration warned against widespread use of the drug.

Meanwhile, a large observational study of 96,032 patients from 671 hospitals in six continents revealed that hydroxychloroquine and chloroquine are both associated with an increased mortality risk.

“We were unable to confirm a benefit of hydroxychloroquine or chloroquine, when used alone or with a macrolide, on in-hospital outcomes for COVID-19,” the researchers wrote in The Lancet publication.