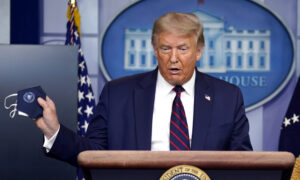 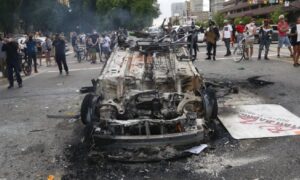 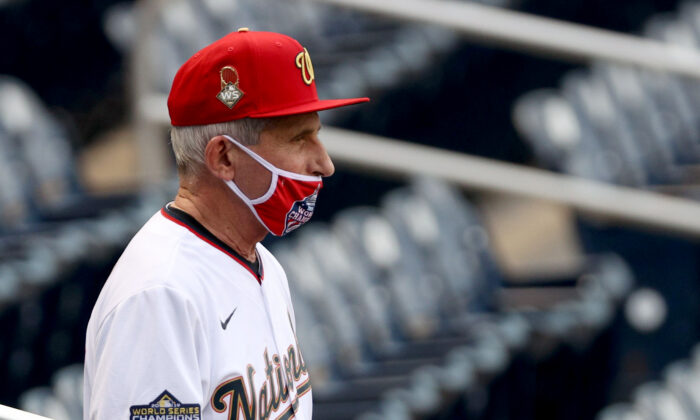 Dr. Anthony Fauci, director of the National Institute of Allergy and Infectious Diseases, looks on before throwing out the ceremonial first pitch prior to the game between the New York Yankees and the Washington Nationals at Nationals Park on July 23, 2020. (Rob Carr/Getty Images))
US News

Fauci Responds to Criticism Over Taking Off Mask During Baseball Game

Dr. Anthony Fauci responded to critics who accused him of hypocrisy for removing his mask during a baseball game in Washington on Thursday.

Photographs from the Washington Nationals game showed Fauci sitting between his wife and another man with his mask pulled down from his mouth and nose, laughing and having a conversation.

Fauci, the longtime director of the National Institute of Allergy and Infectious Diseases, has repeatedly urged Americans to wear masks and said in one interview that he never goes without one in public unless he’s alone or speaking, and only then if there is six feet between himself and non-household members.

Asked about the perceived discrepancy between his advice to others and his own actions, Fauci during an appearance on Fox News on Friday tried dismissing the critics.

“The other person [is a] very close friend of mine,” Fauci said. “John, I understand that, I think this is sort of mischievous with this thing going around. I had my mask around my chin, I had taken it down. I was totally dehydrated and I was drinking water trying to rehydrate myself. And by the way, I was negative COVID literally the day before.”

Supporters of Fauci made the same argument after photographs were posted of the doctor with his mask down and widely circulated on social media.

Critics noted that the water bottle Fauci had with him was capped, casting the argument in doubt.

Washington Mayor Muriel Bowser, a Democrat, this week ordered people in the District of Columbia to wear masks outdoors if they ever come within six feet of people they don’t live with. Her order exempted some government workers, but only when they’re on duty.

Fauci, a top infectious disease expert, has faced heavy criticism from some parties over the change over time in some of his advice during the pandemic. He repeatedly said earlier this year that masks weren’t necessary before he and other U.S. public health officials began urging people to wear them in public.

Many officials said the change was because of findings regarding spread from asymptomatic or pre-symptomatic patients.

“As the information changes, then you have to be flexible enough and humble enough to be able to change how you think about things,” Fauci said during a conversation with Facebook’s Mark Zuckerberg last week.

“Anyone at any given time could be infected, don’t even know it, and feel perfectly well. So, you have a responsibility.”

The early advice was also motivated by concerns over running out of masks for health professionals, Fauci added.