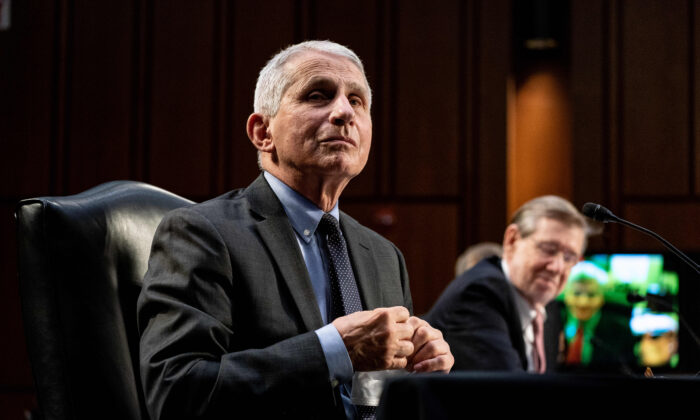 Dr. Anthony Fauci, director at the National Institute of Allergy and Infectious Diseases during a hearing with the Senate Committee on Health, Education, Labor, and Pensions, on the COVID-19 response, on Capitol Hill in Washington on March 18, 2021. (Anna Moneymaker/Pool/Getty Images)
US News

Fauci Issues Warning on Monkeypox in US

Dr. Anthony Fauci, the chief medical adviser to the White House, signaled that more resources will be dedicated to monkeypox and said that the federal government needs to take it “seriously,” as cases have risen across the world.

The latest U.S. data show the Centers for Disease Control and Prevention (CDC) has tracked at least 1,814 probable or confirmed cases across the country as of July 15.

“This is something we definitely need to take seriously. We don’t know the scope and the potential of it yet, but we have to act like it will have the capability of spreading much more widely than it’s spreading right now,” Fauci told CNN. He didn’t elaborate.

Meanwhile, the World Health Organization (WHO) said it will hold a meeting this week to address a recent increase in monkeypox cases around the world and signaled it may declare a global health emergency over the virus.

“Whenever you have the emergence of something like this, you are always probably looking at what might be—might be, we don’t know—the tip of the iceberg, so that’s the reason why we’ve got to get the testing out there in a much, much more vigorous way,” Fauci said on July 16.

The U.N. health agency last week said it was aware of 9,200 cases in 63 countries. On July 15, the WHO announced it will reconvene its expert committee on July 21.

“The emergency committee will provide its views to the WHO director-general on whether the event constitutes a [Public Health Emergency of International Concern],” the U.N. agency said in a statement. The alert is the highest alarm the agency can sound, which it also did in early 2020 for COVID-19.

“If so, it will propose temporary recommendations on how to better prevent and reduce the spread of the disease and manage the global public health response,” the WHO said.

Similar to smallpox and cowpox, monkeypox can cause pox-like lesions and flu-like symptoms including fever and aching, according to health agencies. Before this year, the virus was mainly relegated to western and central African nations.

Several months ago, the U.N. agency said most monkeypox infections so far have been reported among homosexual males who live in urban areas and are of a young age.

Manhattan Borough President Mark D. Levine posted a chart over the weekend showing a significant increase in monkeypox cases in New York. Between July 1 and 13, officials reported more than 170 cases of the virus.

A chart breaking down the demographics showed that men account for 321 of the 336 reported cases in the city. They also attributed about 60 percent of the cases to homosexual males and LGBT people.