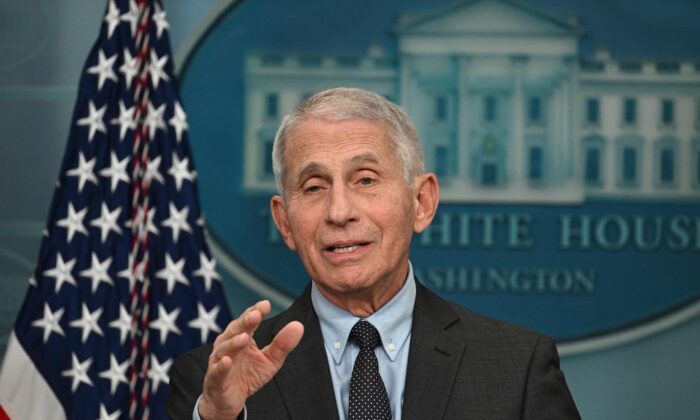 Dr. Anthony Fauci, who publicly backed lockdowns during the COVID-19 pandemic, defended his position during a deposition on Nov. 23, according to people who were present for the questioning.

Fauci, the longtime director of the National Institute of Allergy and Infectious Diseases (NIAID) and President Joe Biden’s chief medical adviser, also said the inspiration for the lockdowns was communist-run China.

During a seven-hour deposition at the National Institutes of Health headquarters in Bethesda, Maryland, Fauci was forced to answer questions under oath on orders from a federal judge who’s set to decide whether the government should be blocked from pressuring Big Tech firms into censoring posts and users.

While Fauci often couldn’t recall actions he took during the pandemic, he spoke about his role in advocating for lockdowns.

Fauci said that Dr. Clifford Lane, a deputy director at the NIAID, reported back to him after Lane went to China in early 2020, a few months after the first cases of COVID-19 were detected in Wuhan.

Lane reported that China appeared to be controlling the COVID-19 virus through harsh lockdowns, and Fauci soon decided the United States needed to emulate China—at least to an extent—according to Jenin Younes, a lawyer with the New Civil Liberties Alliance who is representing some of the plaintiffs in the case.

“This is what we had to do. There were freezer trucks in New York full of bodies,” Fauci said.

New York was hit hardest by the pandemic. Critics say that unusual policies, such as one that forced nursing homes to accept people who tested positive for COVID-19, led to the elevated number of deaths. Tens of thousands of people died in New York nursing homes with COVID-19.

Chinese officials, meanwhile, told residents in various areas to remain inside their homes and forced many to comply by barricading their doors. China is controlled by the Chinese Communist Party, which regularly commits human rights abuses against Christians, Falun Gong practitioners, and others.

“The question of human rights didn’t factor in” to Fauci’s mindset, according to Younes.

Fauci and NIAID haven’t responded to requests for comment on the deposition. Lane, who wrote in a February 2020 email (pdf) that “China has demonstrated this infection can be controlled, albeit at great cost,” declined to comment.

Lane was also part of the World Health Organization team that, along with Chinese scientists, called for countries to “prepare to immediately activate the highest level of emergency response mechanisms to trigger the all-of-government and all-of society approach that is essential for early containment of a COVID-19 outbreak” in a February 2020 report (pdf).

In early 2020, for instance, Fauci said on CNN that he supported policies that would lead to “a dramatic diminution of the personal interaction that we see in restaurants and in bars.”

“For a while, life is not going to be the way it used to be in the United States,” he said on Fox News around the same time. “We have to just accept that if we want to do what’s best for the American public.”

Fauci was successful in convincing Trump to advocate for “15 days to slow the spread,” according to accounts from Dr. Deborah Birx and others who worked closely with the doctor. Birx said in her book “Silent Invasion: The Untold Story of the Trump Administration, Covid-19, and Preventing the Next Pandemic Before It’s Too Late,” “No sooner had we convinced the Trump administration to implement our version of a two-week shutdown than I was trying to figure out how to extend it.”

The federal government later added additional weeks to their recommendations, which triggered mass closures of schools and private businesses on orders from governors across the United States.

Multiple governors, including South Dakota Gov. Kristi Noem and Georgia Gov. Brian Kemp, soon balked at the recommendations, though the harsh measures continued in a number of states into 2021.

Studies have since identified the measures as contributing to jumps in suicides, mental health crises, learning loss, and delayed health treatments.

Fauci didn’t express regret during the deposition for helping trigger the lockdowns, Younes said. Fauci has claimed publicly that he never recommended lockdowns.

Fauci’s NIAID gave grants to the high-level laboratory located in the same Chinese city where the first COVID-19 cases appeared. Some experts believed early on that the illness stemmed from a laboratory accident or purposeful release, although Fauci has repeatedly said all evidence points to a natural origin.

Scientists, though, have never been able to pinpoint such an origin.

Fauci was told early on by top U.S. health officials that a natural origin was “highly unlikely,” while several other scientists told Fauci during a call that the odds were the virus emerged from a lab, according to documents that emerged later in the pandemic.

Those same scientists later penned an influential paper that was widely cited, including by Fauci, in dismissing the lab origin theory. Fauci neglected to reveal his role in shaping the paper.

That private call on Feb. 1, 2020, which included experts from multiple countries, was brought up during the deposition but Fauci said he couldn’t recall the specifics of the discussion, according to Younes.

Louisiana Attorney General Jeff Landry, who was also at the deposition, told The Epoch Times that Fauci couldn’t recall “practically anything” when questioned on his actions during the pandemic.

The case that led to the deposition alleges the government violated the First Amendment by pressuring Big Tech firms to censor users.

Documents produced in discovery show government officials repeatedly urging companies to take action against certain users and posts, alleging efforts against purported misinformation and disinformation weren’t sufficient. Some officials made similar statements in public, including Surgeon General Vivek Murthy, a Biden appointee. The government has said the documents don’t show First Amendment violations and has asked for the case to be dismissed.

U.S. District Judge Terry Doughty, a Trump appointee overseeing the case, said while ordering the depositions that emails “prove that Dr. Fauci was communicating and acting as an intermediary for others in order to censor information from being shared across multiple social media outlets.”

Fauci “has yet to give any statements under oath in this matter,” Doughty said, adding that “the Court has no doubt that Dr. Fauci was engaging in communications with high-ranking social-media officials, which is extremely relevant in the matter at hand,” and that all three points showed any burden Fauci would face for a deposition was outweighed by the importance of the allegations.

Fauci told lawyers during the deposition that he doesn’t use social media and doesn’t have anything to do with it, according to Younes.

Younes represents two of the three co-authors of the Great Barrington Declaration, a 2020 document that challenged the prevailing view that the COVID-19 response needed to include abnormal actions such as school closures in favor of focusing on protecting the high-risk groups, including the elderly.

“I was too busy running a six billion institute to be concerned about things like the Great Barrington Declaration,” Fauci was quoted as saying in the deposition.

But publically released emails show Fauci and his boss at the time, Dr. Francis Collins, were concerned about the declaration. Collins told Fauci he wanted a “quick and devastating published takedown of its premises,” and Fauci sent over an article from Wired that he claimed “debunks this theory.” Fauci said in one email the theory reminded him of “AIDS denialism.” Fauci also spoke publicly against what he interpreted as the document’s main thrust, which he described as “let things rip and let the infection go,” and has stood by his criticism into 2022.

The National Institutes of Health, which Collins led at the time, cited Wikipedia when asked for a source for the claims against the declaration.

“I think he obviously knew what the crux of the lawsuit was and claimed sort of upfront that it’s his opinion that the best way to deal with bad ideas is more speech rather than trying to censor, so I think he was trying to get in front of any allegation,” Younes said.

Fauci’s belief was that Collins calling for a “takedown” meant “offering an article refuting it,” Younes added.

Fauci also denied that any of his conversations with Mark Zuckerberg, the founder of Facebook, dealt with censorship.

The transcript of the deposition is expected to be released at a later date.