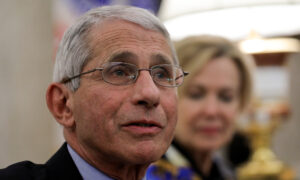 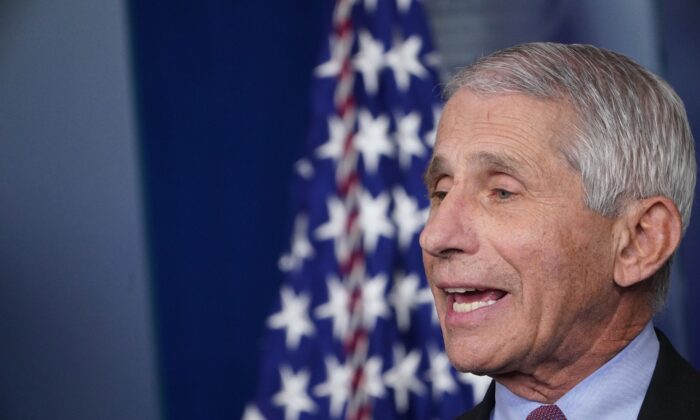 Director of the National Institute of Allergy and Infectious Diseases Anthony Fauci speaks at the White House in Washington on April 22, 2020. (Mandel Ngan/AFP via Getty Images)
AMERICA

Early positive results from a phase one trial of the candidate included all 45 participants producing antibodies and eight volunteers producing neutralizing antibodies, which bind to the CCP (Chinese Communist Party) virus.

Antibodies are a blood protein produced by the immune system to combat viruses and other foreign material.

The phase one trial involves giving vaccines in development to a limited number of people to see if it’s safe and effective enough to move to wider trials.

“When you’re developing a vaccine, there’s always landmines and traps along the way to get in the way of a successful completion of developing a safe and effective vaccine,” Fauci said late Thursday.

“The question is, was it immediately safe? Clearly, it was. But, importantly, it induced the kind of response that you would predict would be protective against the virus, and that’s what’s called neutralizing antibodies.”

Using his hand to mimic the formation of a virus, Fauci said neutralizing antibodies are important because they “bind to the business end of the virus and block it’s ability to infect.”

“So what we saw—even though there was only eight individuals—we saw neutralizing antibodies at a reasonable dose of a vaccine, and the titers were high enough to get us to believe, if we attain that in more people—in a large number of people—you could predict that that vaccine would be protective,” he added.

“Although the numbers were limited, it was really quite good news because it reached and went over an important hurdle in development of vaccines. That’s the reason why I am cautiously optimistic about it.”

Massachusetts-based Moderna still hasn’t released the full dataset it touted recently. Its phase one trial is ongoing even as the company moves to start a phase two trial.

The company didn’t respond to inquiries about when the data will be released and when the initial trial is expected to be completed.

During an interview with NPR’s “Morning Edition” Friday, Fauci acknowledged the data hasn’t been peer reviewed.

“Having looked at the data myself, it is really quite promising,” he said. The data will be peer reviewed at some point, he added, perhaps within the next few weeks. NIAID plans to submit the data to a journal for peer review.

Fauci said a vaccine could be ready to distribute at the end of the year.

The Moderna-produced vaccine is one of two candidates that appear to be furthest along in development.

The AZD1222 candidate, developed by British scientists, could arrive in the United States as early as October, federal officials said this week.

Inovio’s IN0-4800 candidate targets the major surface antigen Spike protein of the CCP virus, which causes the COVID-19 disease.

“We are planning to utilize these positive preclinical results along with our upcoming animal challenge data and safety and immune responses data from our Phase 1 studies to support rapidly advancing this summer to a large, randomized Phase 2/3 clinical trial,” Dr. J. Joseph Kim, Inovio’s president and CEO, said in a statement.

The vaccine was originally developed against MERS, the last coronavirus to jump from animals to humans.