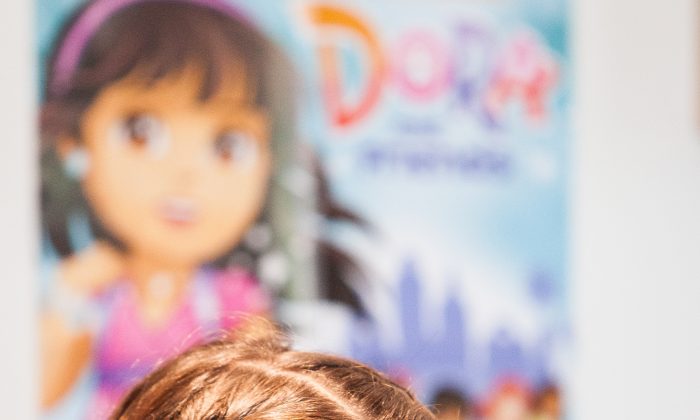 Fátima Ptacek, the voice of Dora from TV series "Dora the Explorer," attends a screening of a spin-off show "Dora and Friends: Into the City," at Children's Museum of Manhattan, in New York, Aug. 10, 2014. (Petr Svab/Epoch Times)
News

NEW YORK—Tots huddled in front of a TV within the colorful walls of the Children’s Museum of Manhattan, drinking in an adventure nouveau, unwittingly learning their lefts and rights, one-two-threes, and spatial reasoning.

They were watching “Dora and Friends: Into the City,” a new spin-off of a popular educational cartoon “Dora the Explorer.”

“How old is Dora in her new show?” asked the host. “Bigger,” answered a tike with all due urgency. The children were in for a treat that day as the voice of Dora herself came to greet them.

The talk features Fátima Ptacek, Queens-born actress, model, level-8 gymnast, and a straight A student turning 14 in a few weeks. Her last name (pronounced pTAH-chek), means “birdie” in Czech, a part of her father’s European ancestry. Her mother is Ecuadorian, thus Ptacek learned Spanish as her first language.

From the moment she shot her first commercial when five years old, to the moment last year when she held the Oscar statue (won for the short film “Curfew,” in which she played a lead), Ptacek ponders sometimes if she’s about to wake up from a dream. So far, the top is still spinning.

“I think I just happened to be really, really lucky,” she said about landing her Dora part, certainly the most extensive job she has ever done. But it wasn’t an easy one to get.

The 2010 audition was tough. Three call-backs but no word on what the role was. “They said it was a secret project,” she said. Her agency only told her that Nickelodeon TV network had asked for a girl who could speak Spanish and “who is kind of fun and playful,” she said, pointing at herself, then breaking into a laugh.

After a couple of months she received a phone call informing her that she would be the new voice of Dora the Explorer.

Her career was well underway at that time. Her first showbiz job was a commercial for Disney in 2006. They flew her to a Disneyland in California for the shooting, “which is pretty cool,” she said.

Over the next several years, and thanks to an agency representation, she landed a number of modeling jobs for brands like Ralph Lauren, The Gap, and Benetton. “You make connections with these people and they want to bring you back,” she said. Summer collection, spring collection—the jobs kept coming.

Meanwhile, she kept landing parts in TV commercials—she’s done about 80 by now. Thanks to people she got to know in the industry, she was introduced to auditions for TV shows and movies, gradually working her way up.

Then, in 2010, she got a leading part in Shawn Christensen’s “Curfew,” a 20-minute story of a depressed man having his life turned around by looking after his niece. The movie ended up winning the 2013 Oscar for the best live action short. That was a “moment of awe” for Ptacek. “I thought I was dreaming,” she said. “I thought it couldn’t be true.”

Interestingly though, she has never received acting lessons. “I think I’m kind of scared that they’ll poison my mind and change the way I am,” she said. “I don’t want to change too much.”

Though Dora the Explorer has been around since 2000, getting a new voice every four to five years, it took a while before her fame shone on Ptacek. She was asked to keep her role a secret for the first year. “It was excruciatingly painful,” she said. “Because, of course, I wanted to get it out there, I wanted people to know about this cool awesome new thing that I was doing.”

And even after that, voicing a cartoon character does little to put one’s face out there.

Still, thanks to multiple interviews and TV appearances, she reached the point when people would stop her on the street, asking for pictures. “I’m pretty up there,” she said, joking.

For Ptacek, the key to handle the pressure is to keep a proper balance of “normalcy” in her life. A 2013 Metro UK article called her one of the highest paid child models in the world earning about $300,000 a year. But she doesn’t pay attention. “It’s kind of a crazy thing to wrap your head around,” she said.

The job has given her some valuable lessons. Juggling acting, modeling, school, and 20 hours a week practicing gymnastics, she “learned to stay organized.”

And another takeaway was humility. “My family has been so supportive and I know so many people who don’t have the guidance and don’t have the amazing people behind them, encouraging them, and giving them the right pushes. I guess it really makes me appreciative,” she said.

That, however, doesn’t mean she aims low. Even though Ptacek recently reconsidered an ambition to take her gymnastics to the Olympics, she still has her eye on a Harvard law degree and becoming the first female President of the United States.

“I’ve already come so far at such young age. I don’t think I’m scared of dreaming anymore,” she said.

Until clearing the 35 age limit for presidency, she’d like to see her acting career taking off and, meanwhile, she also needs to keep her grades up.

In September Ptacek starts at the $43,000-a-year Avenues high school in Chelsea, where she’ll be able to further develop her Mandarin Chinese. “School isn’t really a hobby,” she said “It’s more of like ‘You better do it and you better do well’.”

Thankfully, she said she does well under pressure.