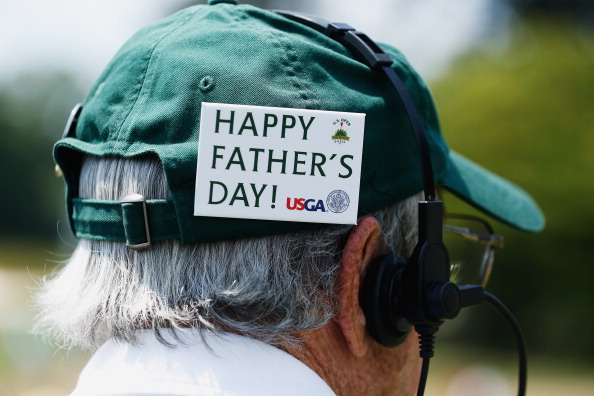 A man wears a badge on his hat that says "Happy Father's Day" during the final round of the 113th U.S. Open at Merion Golf Club on June 16, 2013 in Ardmore, Pennsylvania. (Photo by Scott Halleran/Getty Images)
Social Media

Father’s Day is Sunday, June 15, so here’s a few quotes about the holiday:

“A real man loves his wife, and places his family as the most important thing in life. Nothing has brought me more peace and content in life than simply being a good husband and father,” — Frank Abagnale

“Nothing I’ve ever done has given me more joys and rewards than being a father to my children,” — Bill Cosby.

“I decided in my life that I would do nothing that did not reflect positively on my father’s life,” — Sidney Poitier.

“One father is more than a hundred schoolmasters,” — George Herbert.

“It would seem that something which means poverty, disorder and violence every single day should be avoided entirely, but the desire to beget children is a natural urge,” — Phyllis Diller.

“When I was a boy of fourteen, my father was so ignorant I could hardly stand to have the old man around. But when I got to be twenty-one, I was astonished at how much he had learned in seven years,” — Mark Twain.

“It is not flesh and blood but the heart which makes us fathers and sons,” — Johann Friedrich von Schiller

“By the time a man realizes that his father was right, he has a son who thinks he’s wrong,” — Charles Wadsworth.

THE ASSOCIATED PRESS UPDATE: Obama on Father’s Day: Being a dad takes courage

WASHINGTON (AP) — President Barack Obama is urging fathers to get more involved in their kids’ lives and to serve as mentors for children who don’t have fathers around.

Obama is reflecting on Father’s Day in his weekly radio and Internet address. He says he knows how important dads are because his own father was absent.

Obama says he tries to be the father and husband his family didn’t have. He says being able to have a child doesn’t make you a man, but having the courage to raise one does.

Obama recorded the address at the White House before departing Friday for North Dakota and California.

In the Republican address, Sen. Tom Coburn of Oklahoma says Obama must nominate a capable and experienced secretary to clean up the Veterans Affairs Department.