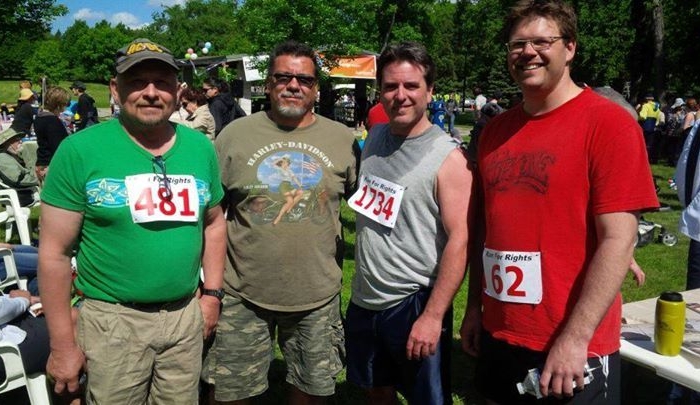 When Brad Franck joined fathering support group Better Fathers Inc., he was at the end of his rope.

In the midst of a difficult divorce, custody disagreements and communication problems with his ex-wife had peaked. She was withholding access to the children, and he was desperate to be more involved in their lives.

“I went there with clenched teeth and closed fists and a lot of anger,” Franck remembers of his first session with Better Fathers. “I was hitting a lot of dead ends.”

The group sessions, led by retired social worker Paul Molloy, include 20-30 dads who meet in the basement of a small church in Winnipeg’s west end. As Franck returned each week to learn about being a better dad, and shared challenges and fears with the other fathers, his anger began to dissipate.

“I looked so forward to every Thursday night, sitting with 25 other fathers that were going through some of exactly the same things as me,” he says.

Franck successfully completed the 12-week program. It helped him better understand himself, his ex-wife, and his children to the point that he went through the program again, and then twice more. The experience was life-changing, he says.

“If it wasn’t for the Better Fathers program I have no idea where I’d be right now. I’d be a very angry man,” says Franck, adding that he now has “an amazing” relationship with his two children and better control over his reactions to his ex-wife.

Franck’s experience is common, says Molloy, adding that some dads have been coming to the group regularly for over a decade. Recognizing the lack of services for men with children and the vital role fathers play in a child’s development, he helped found Better Fathers Inc. in 1997 along with colleagues Donovan Tomlinson and Luis Coelho.

Research over the past decade has highlighted the crucial role fathers play. Children whose dads are deeply involved in their lives show improved outcomes in almost every aspect: cognitive, educational, social, physical, psychological, financial, emotional, and more.

The eight- and twelve-week programs offered at Better Fathers cover a wide range of topics, from family, child, and relationship development to anger management and parenting styles. Sometimes Molloy invites guest speakers—such as custody lawyers or domestic violence experts—tailored to the problems the men are facing.

First Nations dads make up about half the fathers in the program, but men from all racial and socioeconomic groups attend, says Molloy.

Franck says this diversity helps vary the topics and perspectives, and the men learn much from others’ successes and failures.

“Every session is different based on the questions and the situations of the men that are there, so there is never a same session twice,” he says, adding the fathers are a big support to each other and sometimes meet outside of the group. “It’s very powerful.”

Most men are referred to Better Fathers by Child and Family Services, lawyers, friends of members, or past group members. About 1,800 men have been through the program since it started 18 years ago, yet it remains one of few successful father-focused programs in Canada, and constantly struggles for adequate funding.

There are reasons for optimism, however. Over the last year a number of organizations and individuals have come together to create the first national fathering organization—Canadian Father Involvement Network (CFIN)—in order to promote fathering, best practices, and research. CFIN will hold its first conference in the spring in association with Family Resource Centres Canada.

As Molloy nears his 75th birthday he worries about what could happen to Better Fathers when he and the other founders retire. But for now, he says he will continue leading the program every week.

As the winter session kicks off on Jan. 22, a new group of fathers will gather in the small church basement and endeavour to change their lives.