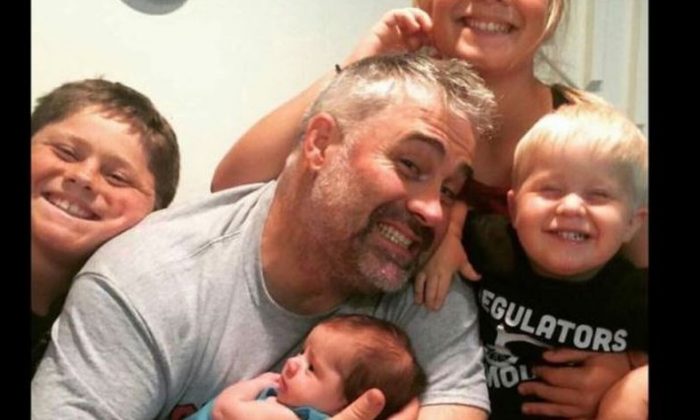 A father of four landed in a San Diego ICU after catching the flu and is critically ill, according to reports.

NBC San Diego reported that Shawn Burrough, 48, of El Cajon, got the flu around Christmas.

San Diego County father of four fighting for his life after ignoring flu symptoms; family has warning for others https://t.co/8O3dVwO6FM

The U.S. Navy veteran’s wife, Jennifer, said that Burrough got critically sick with complications from the illness. She said that he was diagnosed with Influenza B, a less common form of the flu.

Burrough had problems with his breathing and landed in the Intensive Care Unit at Sharp Grossmont Hospital in La Mesa, the report said.

“He had a full-on episode,” Jennifer said. “He could not breathe at all. They rushed him into a room and rushed me out. They sedated and intubated him, so he could breathe. I never thought in a million years that a flu—something as very simple as a flu—would do this, would cause him to be so sick. And fast! Fast!”

“His symptoms were a cough, body aches, runny nose, congestion, low-grade fever—typical symptoms,” his wife told People. “Things got worse about day five when he said his chest was tightening and he said it was hard for him to get his breath.”

She said that Burrough works two jobs and is the father of four kids. “Other than being a little overweight he’s totally healthy, a totally healthy guy,” said Jennifer.

With San Diego County in the midst of a flu epidemic, one family is in the fight of their lives.Heavily sedated and on a ventilator, Shawn Burrough is in the Intensive Care Unit at Sharp Grossmont Hospital fighting for every last breath. https://t.co/c83wu0jNLJ

“He’s in renal failure because of the infection in his blood. He’s getting dialysis,” she added to KTLA.

Friends of the family put up a fundraising page to help pay for expenses.