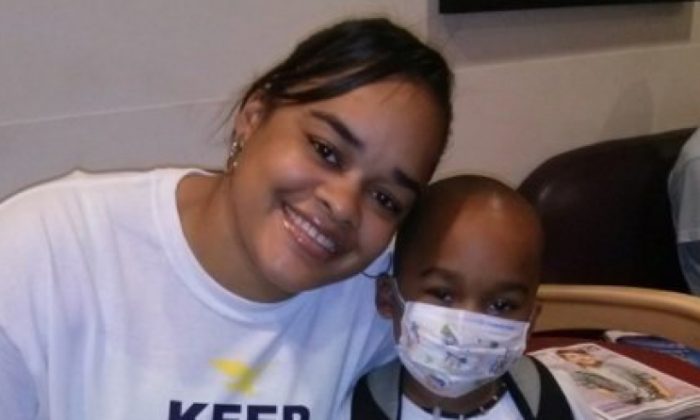 Ryan Crawford tried to get custody of his son for years as he watched the boy’s mother, Kaylene Bowen-Wright, subject the child to hundreds of doctor visits and 13 allegedly unneeded major surgeries over the course of eight years.

Now, Bowen-Wright has been arrested and charged with injury to a child, according to Star-Telegram. The mother is accused of pretending that her son was sick with many illnesses, including cancer.

The boy’s father told CBS that he tried to get custody for three years. He failed each time because the mom claimed in court each time that the boy was on his deathbed.

“As soon as she would get on the stand to testify, each and every time, she would just start crying, basically saying he’s in a coma,” Crawford told CBS.

Crawford dated Bowen-Wright briefly and the relationship resulted in a pregnancy.

The dad told Star-Telegram that the trouble started before the boy was born, with Bowen-Wright calling him from different hospitals to say she was admitted. Matters got worse after the couple’s son Christopher was born prematurely in 2009 at 33 weeks.

This condition persisted for eight years. Medical records show that Christopher was taken on 323 doctors visits and subjected to 13 major surgeries. He had a feeding tube and had an oxygen supply round the clock.

“I figured that one day that that would be the end cause,” Crawford told CBS referring to how he thought the mom may kill her child one day.

The courts always fell for Bowen-Wright’s act and sided with her. In 2012, a judge barred Crawford from visiting his son because he refused to believe in Crawford’s account.

“Every time I went to court, they made me feel like I was the worst human ever,” Crawford told Star-Telegram.

He is now going to court to get custody of the child. The boy appears healthy.

“I am so sorry that I wasn’t able to be there to stop the harm that has been done unto you,” the dad told CBS.

Dallas Children’s Medical Center suspected that Bowen-Wright was faking her child’s illness during a recent visit. The hospital called Child Protective Services, triggering an inquiry that resulted in the mom’s arrest.

CPS believes the mother has Munchausen syndrome by proxy, a mental condition where a caregiver fakes illnesses of the person in their care to satisfy a lust for sympathy and attention.

Bowen-Wright hosted several fund-raising drives for her child on the internet and a local TV station aired a segment in 2014 to help raise funds for the boy’s ‘condition.’

“The fundraising, the doctor shopping. Those are certainly common elements of our cases,” said Matthew Gilbert, the regional director of investigations for CPS told CBS.  “These investigations are very rare. They don’t come up very often.”

Crawford told Star-Telegram that his boy has been taken off allergy medications.

“You would think my son would be so screwed up. Obviously mentally, he’s going to need some counseling,” Crawford said. “But he is so sweet, so nice, so playful. You wouldn’t think that he had gone through all this abuse.”