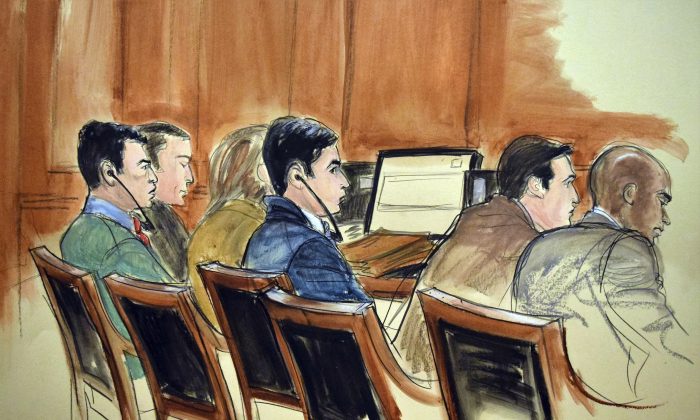 In this Nov. 14, 2016 courtroom file sketch, the drug trial of two nephews of Venezuela's first lady proceeds in New York with, from left, Francisco Flores, with earphones and Efrain Campo, with earphones. (AP Photo/Elizabeth Williams, File)
Crime and Incidents

Father-Son Informants Trafficked Drugs While on US Payroll

NEW YORK—Informants with dirty pasts are a fixture at drug trials, but even by those standards, the father-son team that played a central role in the cocaine trafficking prosecution of the nephews of Venezuela’s first lady stands out.

Over several years, the U.S. government and other law enforcement agencies paid about $1 million to Jose Santos-Pena, 55, and hundreds of thousands of dollars more to his son, Jose Santos-Hernandez, 34, for information about drug dealers.

The pair traveled to multiple countries, including some where Drug Enforcement Administration agents aren’t welcome, to make secret recordings of people believed to be involved in drug trafficking. That included Venezuela, where Santos-Pena recorded two nephews of Cilia Flores, the wife of Venezuelan President Nicolas Maduro, handling a block of cocaine.

Then, in April, prosecutors learned that while working for the DEA, Santos-Pena and Santos-Hernandez were also hard at work smuggling drugs themselves.

In late summer, just as the case against Flores’ nephews was getting ready to go to trial in New York, Santos-Pena and Santos-Hernandez pleaded guilty to trafficking charges, admitting dealing drugs for at least four years, including while they were building the Venezuelan case last fall under the direction of the DEA.

Prosecutors went ahead anyway with their case against Venezuelans Francisco Flores, 31, and his cousin, Efrain Campo, 30, who were accused of conspiring to ship over 1,700 pounds of cocaine into the U.S. They were arrested in Haiti last year and flown to the U.S. for trial.

The government, though, did not know that more surprises lay ahead for its star witness, Santos-Pena. His son did not testify at the trial.

At a court hearing in September, Santos-Pena confessed to prosecutors during a lunch break that he had used a prostitute twice during a trip in Caracas, Venezuela, last year. He had also allowed his son’s friend to sit in on some of the DEA-orchestrated meetings with their Venezuelan targets. And he admitted that he’d been using cocaine regularly while working for the DEA.

And as the trial against Campo and Flores neared its conclusion this month, defense attorney Randall Jackson revealed that he had jailhouse tapes that proved Santos-Pena continued to communicate about drug deals in recent weeks.

After the tapes were played for jurors, a prosecutor notified Santos-Pena that his continued lies, including that he had not communicated with his son while in prison, meant the government was ripping up a cooperation agreement that he was counting on to win leniency. Without it, he faces a minimum of 10 years in prison and a maximum of life. Santos-Pena seemed surprised.

Prosecutors overcame the humiliation of their star witness when the jury returned a guilty verdict Friday against the nephews.

“He was slime,” juror Robert Lewis, a 69-year-old architect, said of Santos-Pena. He said other evidence, including transcripts of conversations involving the nephews and text messages, were enough to prove guilt.

“We had to rely on those things,” Lewis said.

Prosecutors knew going in that Santos-Pena had a shady past. Before he began cooperating with U.S. authorities in 2007, he testified that he had been a member of the Mexico-based Sinaloa drug trafficking cartel for a decade. He moved to the U.S. in 2003. He said he was involved in deals this year in Los Angeles and Pomona, California, involving about 7 kilograms of cocaine.

In court papers praising the two informants earlier this year, federal prosecutors wrote that Santos-Pena and Santos-Hernandez had “participated in multiple significant international drug trafficking investigations, including cases focusing on some of the most violent places in the world targeting extremely violent criminals.”

Lawyers for Campo and Flores said in their closing statements to jurors Thursday that the informants are simply liars who shouldn’t be believed.

“You saw a rare thing, a government cooperator get ripped up in court,” attorney David Rody said.

For all the dirt revealed about the informants in the Venezuelan case, they will never rival the notorious history of Salvatore “Sammy the Bull” Gravano, who admitted his role in 19 murders in a sweetheart deal that resulted in a five-year prison sentence in exchange for his testimony against the late Gambino boss John Gotti.

Still, Richman noted, the issue for jurors is the credibility of the witness.

As for Gravano, Richman said: “He was just a murderer, not a liar.”