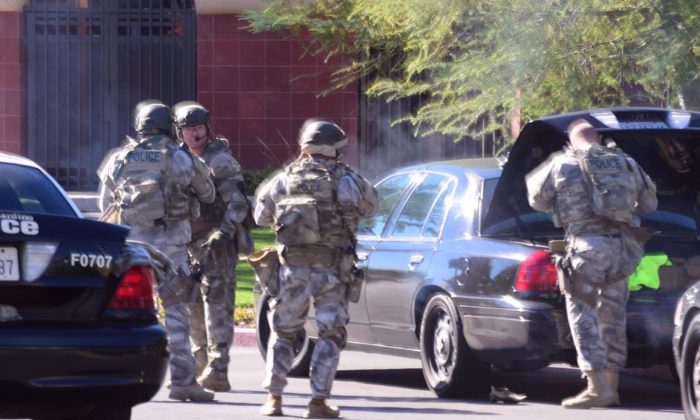 A swat team arrives at the scene of a shooting in San Bernardino, Calif. on Wednesday, Dec. 2, 2015. Police responded to reports of an active shooter at a social services facility. (Doug Saunders/Los Angeles News Group via AP) MANDATORY CREDIT
US

Father Receives Frantic Text From Daughter at Shooting Site: ‘Pray for Us’

Terry Pettit experienced every parent’s worst nightmare when he received a chilling text from his daughter on December 2.

Pettit’s daughter, who was not named, texted him to alert him that she and some co-workers were being attacked by gunmen.

The mass shooting took place at the Inland Regional Center in San Bernardino, a nonprofit that works with individuals with developmental disabilities.

“Shooting at my work. People shot. In the office waiting for cops. Pray for us. I am locked in an office,” she wrote, Pettit told KABC.

Pettit struggled not to break down as he recounted the text.

Father reads text from daughter: “Shooting at my work. People shot…Pray for us.” https://t.co/Hv8FNXsc3X https://t.co/vEnH2FNdBe

Olivia Navarro, crying, says she received a panicked call from her daughter Jamille, who works with special needs children at the center.

“She told me there were shooters in the building,” she told the New York Times. “She was hiding in her room. They turned off the lights. She was whispering because she didn’t want to be heard. I told her to stop talking. I said, ‘All right, I’ll be right there, turn out the lights, don’t do a thing.’ Why would somebody want to hurt somebody who helps children?”

Gabriel Torres heard from his wife Carina, who works at the center. She spent around 30 minutes on the phone as she hid under her desk, and just before she hung up told her husband to take care of their four daughters if anything were to happen to her.