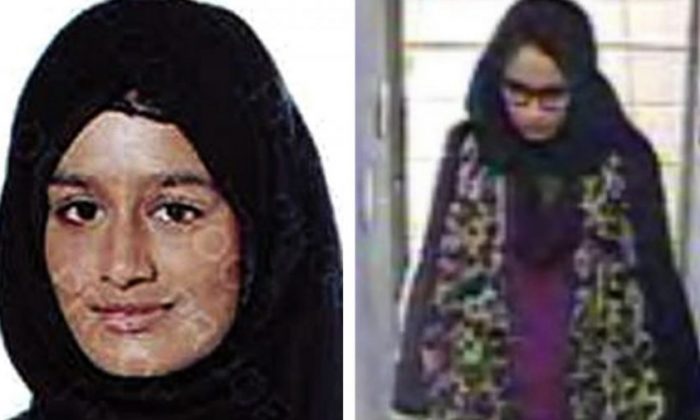 Shamima Begum, a British teenager who ran away from Britain to join ISIS terrorists in Syria four years ago and then got pregnant. She said on Feb. 14, 2018, she wants to come back to London with her child. (Metropolitan Police via AP)
UK

His latest remarks, made from his home in Bangladesh, contradict earlier comments which he says were "misinterpreted"
By Simon Veazey

The father of Shamima Begum, the London schoolgirl who traveled to Syria to join ISIS, said that the UK is duty-bound to allow her to return to the UK from Syria and face the music for any crimes she committed.

His  latest comments, in an interview with AFP on Feb. 25, contradict his remarks as reported by the Daily Mail just the day before, which he now says were “misinterpreted.”

Begum, now 19, recently gave a series of interviews expressing her wish to return, but showed little remorse, stirring massive public interest, and prompting the UK interior secretary to announce last week that her citizenship had been revoked.

“I don’t think that [to revoke Begum’s citizenship] was a right thing to do,” said Ahmed Ali, who lives in Bangladesh with his second wife. “To err is human. You and I can both make a mistake. It is OK to commit an error, all humans do that. One feels sad if a child commits a mistake,” he told AFP.

Ali’s latest comments align him with the rest of Begum’s family, who live in the UK.

Just a day before, Ali was quoted by the Daily Mail as saying, “I know they [the British government] don’t want to take her back, and in this, I don’t have a problem. I know she is stuck there [in Syria] but that’s because she has done actions that made her get stuck like this.”

“I can’t say whether it is right or wrong, but if the law of the land says that it is correct to cancel her citizenship, then I agree.”

Ali said those remarks had been “misquoted,” according to AFP, but there was no further information provided as to what this meant.

Begum, meanwhile, spoke to The Sunday Telegraph at the al-Hol camp in Syria where she is staying with her newborn son, saying: “They are making an example of me. I regret speaking to the media. I wish I had stayed low and found a different way to contact my family. That’s why I spoke to the newspaper.”

She admitted, however, that she had benefited from extraordinary treatment at the camp due to the international exposure.

“They gave me my own tent. They’re being a bit nice to me right now because I’m all over the news.”

With ISIS territory squeezed to its final dregs by U.S.-led forces in the last couple of months, interest has grown in the so-called ISIS brides who traveled from the West and are now accumulating in the refugee camps in Syria as the caliphate shrinks to nothing.

Begum traveled to Syria as a schoolgirl, aged just 15, from her home in London to join the so-called caliphate. She gave birth in the last few days in a Kurdish refugee camp, after sparking controversy with a number of interviews.

The refugee camp of 40,000 has an estimated 1.500 people who traveled from Western nations, predominantly Europe, to join ISIS.

According to the Guardian, there is only one person in the camp who traveled from the United States to join ISI: Hoda Muthana. Like Begum, she traveled to Syria to be an “ISIS bride.”

Muthana, 24, is alleged to have been a prominent online agitator for ISIS, marrying three members of the terrorist organization after she traveled to Syria in 2014.

Tracked down by media in a refugee camp a few days ago, now with an 18-month-old son, she wants to return to the United States.

At the request of President Trump, Secretary of State Mike Pompeo said that she would be blocked from returning.

ISIS’s once-sprawling “caliphate” that stretched over much of Syria and Iraq, is now confined to Baghouz, a town in eastern Syria.

On Feb. 20, ISIS looked close to defeat in its last enclave in eastern Syria as civilians poured out, and the U.S.-backed Syrian Democratic Forces (SDF) said the remaining jihadi wanted to fight to the death, Reuters noted.