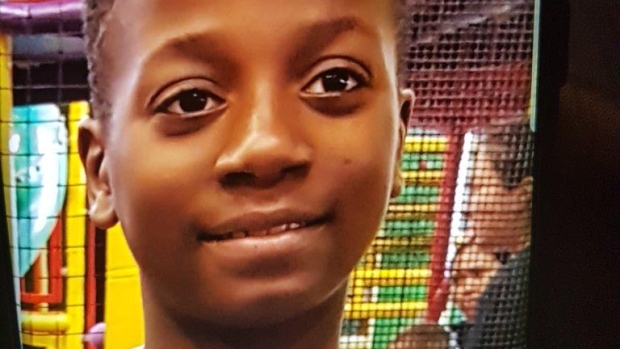 MONTREAL—As firefighters, an ice rescue unit and police on all-terrain vehicles and horseback trudged through fresh-fallen snow in their search for a missing Montreal boy Wednesday, his father held out hope he will come home safely.

“I’m talking and thinking about those people I don’t know and who are here to help us, so I have hope, I have hope,” Frederic Kouakou told reporters at a police command post set up to help find Ariel Jeffrey Kouakou, 10.

“My son (will) come back. I have that feeling.”

Wednesday’s search was centred on a park and riverbank near where the boy was last seen Monday afternoon after telling family he was heading to a friend’s house.

Montreal police spokesman Jean-Pierre Brabant said officers from nearby communities as well as a canine unit helped in the search, while police decided to not send divers into the river because they had no target areas where the boy might have been.

But Kouakou said he didn’t believe his son would have gone to the river because the family never went there.

He said a security camera at a nearby garage had captured his son’s image, leading him to believe the boy had been heading to visit his friend as planned.

“He was walking to the place he was supposed to go,” he said.

Police said they received about 120 tips after triggering an Amber Alert on Tuesday afternoon, including a piece of information from a woman who said she saw someone matching the boy’s description at about 2 p.m. on Monday at a park not far from his home.

“In these types of investigations, we have to be sure that we didn’t overlook anything,” Insp. Andre Durocher said in an interview.

“Any possible trail, maybe a piece of clothing, maybe a footprint, anything—that’s what we’re trying to find.”

Later on Wednesday, Durocher confirmed police had met the woman who saw the boy matching Kouakou’s description. She reported having had a conversation with him in which he seemed “sad.”

The boy’s father dismissed reports he had told the 10-year-old shortly before he disappeared that he could no longer play video games.

Meanwhile, friends and concerned neighbours canvassed the neighbourhood in small groups in the hopes of finding him.

Issiaka Samassi, who knows the boy’s father, said he joined the search in response to a call from the local Ivorian association.

He said searchers were very worried, but still hopeful the boy would be found safe.

“It’s already been two to three days, and (it’s harder) with the snow, but we still have hopes of finding him,” he said in an interview.

“We hope to find him at someone’s place, that someone took him in and will come forward.”

Durocher added that a mobile police command post would remain near the park overnight and that officers hadn’t yet ruled out any hypothesis about what may have happened.

Police say the boy, who is French-speaking, is black, has black hair and black eyes and was wearing a black coat with a hood, grey pants and yellow shoes before he disappeared.

Local residents were told to remain vigilant and to keep an eye on any places a young boy may hide from the wintry weather that hit Montreal on Wednesday.

Police said while the disappearance didn’t meet the criteria for an Amber Alert, they took the measure given Kouakou’s age, the cold weather in Montreal and the fact he has no history of running away.

Durocher added the alert was lifted late Tuesday night because there was no indication Kouakou had been abducted or that his life was in danger.

The Missing Children’s Network, a non-governmental agency based in Montreal, said the initial moments after a child goes missing are critical and she argued police waited too long to get groups involved.

While Kouakou’s disappearance didn’t fit the Amber Alert criteria, executive director Pina Arcamone said there are other ways to reach the public quickly through social media with the most crucial piece of information: a missing child’s photograph.

Arcamone said that following the disappearance of Quebec girl Cedrika Provencher in 2007, police looked into a secondary alert for missing youngsters that fell outside of Amber Alert criteria but that nothing came of it.

“Certainly, there are tools that are not costly that can alert an entire population to be on the lookout,” she said.