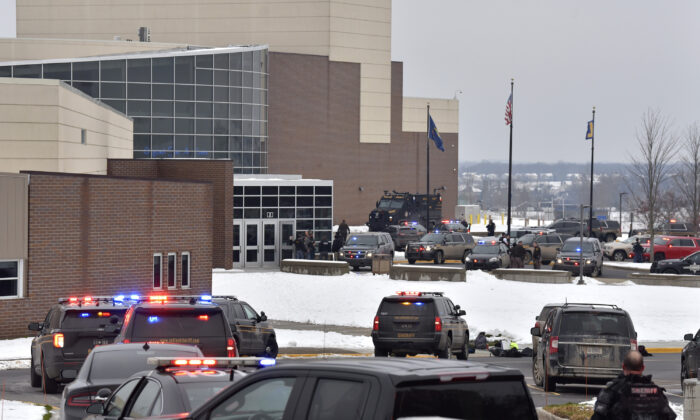 Dozens of police, fire, and EMS personnel work on the scene of a shooting at Oxford High School in Oxford Township, Mich., on Nov. 30, 2021. (Todd McInturf/The Detroit News via AP)
Crime and Incidents

The father of a teenager suspected of fatally shooting three students at a high school in Michigan on Tuesday is believed to have purchased the semiautomatic gun used in the attack just days ago, authorities said.

A boy and two girls were killed in the shooting incident at Oxford High School in Oxford, Michigan. They have been identified as 16-year-old Tate Myre, 14-year-old Hanna St. Juliana, and 17-year-old Madisyn Baldwin.

Eight others, including a teacher, sustained gunshot wounds in the attack, according to authorities.

Oakland County Sheriff Michael Bouchard told reporters at a news conference on Tuesday night that law enforcement officials believe the 9-millimeter Sig Sauer pistol used in the attack was purchased by the suspect’s father on Nov. 26, four days before the shooting incident.

Bouchard said the suspect had at least two 15-round magazines. Two were seized by law enforcement officials at the scene but he is believed to have had a third.

The suspected shooter, a 15-year-old male student, is believed to have acted alone and was arrested with “no resistance” after firing 15 to 20 shots, Oakland County Undersheriff Mike McCabe said on Tuesday evening.

“The whole thing lasted five minutes,” McCabe said, adding that the 15-year-old is refusing to cooperate with police and demanded his right to a lawyer on being advised not to speak by his parents.

The identity of the suspect and a motive haven’t been disclosed.

Bouchard said the suspect’s gun was loaded and had seven rounds of ammunition when he was confronted by authorities.

“When they took it from him, he had a loaded firearm and he was coming down the hall,” Bouchard said. “That, again, I believe interrupted what potentially could have been seven more victims.”

Bouchard said it isn’t clear at this time why the suspect’s father purchased the gun. He said the teenager had posted photos of the gun online.

According to McCabe, the teenager is being held at the Oakland County Children’s Village and is lodged as a juvenile, noting however that the county prosecutor could charge him as an adult.

Oakland County Prosecutor Karen McDonald said in a statement that the suspect will remain in custody pending appropriate charges.

“It is our intent to review it [the investigation] thoroughly and issue appropriate charges quickly,” McDonald said.

Michigan Gov. Gretchen Whitmer issued a statement saying that she was “devastated for the students, teachers, staff, and families” of the high school where the shooting took place, calling the incident horrific.

“This is an unimaginable tragedy,” she said.

Dana Nessel, the state’s attorney general, said in a statement that her “heart goes out to the parents who have lost their children and to the students, teachers, staff, and families reeling from the tragedy of a school shooting within their community.”