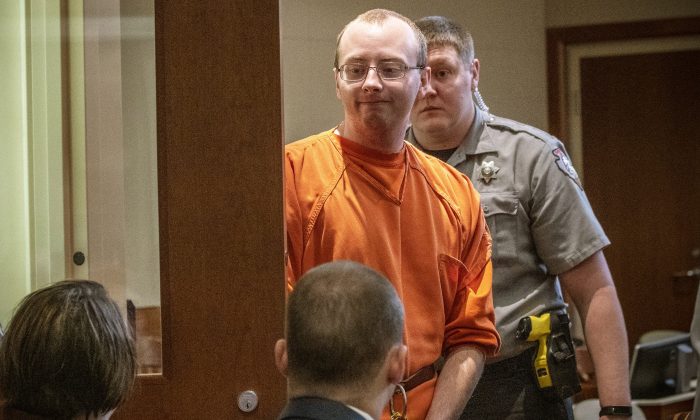 The father of Jake Patterson, who authorities said confessed to kidnapping 13-year-old Jayme Closs after killing her parents, apologized to Jayme’s family after telling his son”I love you” in court on Feb. 6.

Patterson, 21, of Gordon, was ordered to stand trial after waiving his rights to a preliminary hearing.

Following the appearance, Patrick Patterson said that he’s sorry for what happened to Jayme.

“My words can mean nothing after such a tragedy has taken place,” Patterson told ABC.” “I most definitely want Jayme’s family to know, everyone to know, that our hearts are broken for their family.”

Struggling to maintain his composure, Patterson added: “I’m very sorry for everything that has happened. These words come directly from my heart and my family’s heart.”

“I wish for a complete healing of Jayme’s mind, heart, and soul,” he said.

Patterson’s family has said that they had no clue Jayme was being held hostage at a cabin about an hour north from her Barron house.

“Our hearts are broken for their family”: Father of Jayme Closs’s alleged abductor speaks out. https://t.co/eGOAgXQTHK pic.twitter.com/Jz8dVgQIEG

Officials said that Patterson, clad in black and wearing a ski mask, burst inside the house on Oct. 13, 2018, shooting Jayme’s father before finding her and her mother, Denise Closs, huddled in the bathroom.

He ordered Denise Closs to put tape over her daughter’s mouth and then shot her. He then restrained Jayme and threw her in the trunk.

Patterson held Jayme for 88 days before she escaped on Jan. 20, fleeing after Patterson went out.

While the teen was being held, Patterson would force her under his bed when he had people over. According to one report, that included a gathering at the cabin on Christmas Day that the party included Patrick Patterson and Jake Patterson’s sister, in addition to their partners.

None of the attendees knew that Closs was inside Patterson’s room, hiding under his small bed and obscured by a number of bins that were held by weights law enforcement sources told the Milwaukee Journal-Sentinel.

“The family was there,” one source said. Patterson “told (Jayme) that if she made a noise or tried to escape, he would kill her.”

Jim Moyer, Patterson’s grandfather, said that no one else in the family knew Jayme was in the house.

“Nobody had any clues up until this thing happened,” Jim Moyer told ABC following Closs’s escape from captivity. “Nobody will ever know what went on in his mind. I can’t fathom anything in his life that could change him so drastically. It has to be some kind of a twist in the mindset.”

They initially hoped it was a case of mistaken identity, but Patterson confessed to killing Jayme’s parents before abducting her and has been charged with two counts of intentional homicide and one count of kidnapping.

The families were both in court that day while Patterson was arraigned via video conference.

His father wept with his head buried in the shoulder of a relative sitting next to him, while Closs’s family stayed calm, embracing each other on the other side of the courtroom.