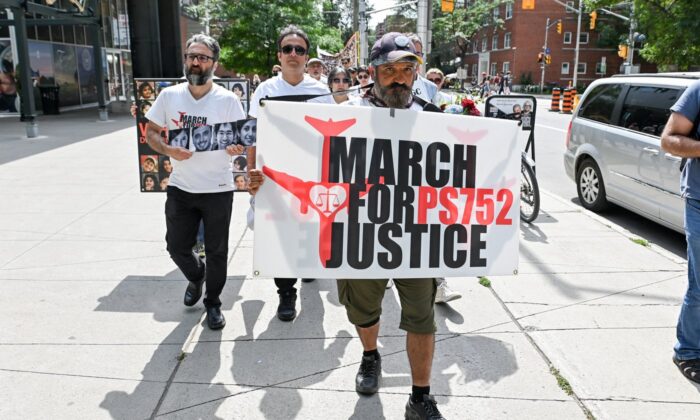 Mehrzad Zarei marches during a demonstration in Ottawa on Aug 25, 2022. (The Canadian Press/Spencer Colby)
Canada

The father of a victim aboard Ukraine International Airlines Flight 752—shot down by Iranian missiles in January 2020—has arrived in Ottawa after marching for over two weeks to meet Prime Minister Justin Trudeau.

Mehrzad Zarei, father of 17-year-old Arad who died in the shootdown, began his journey from Richmond Hill, Ont., to Ottawa on Aug. 10 to hand Trudeau a letter with demands for justice for the flight victims.

Among the demands is listing Iran’s Islamic Revolutionary Guard Corps as a terrorist group.

With Trudeau in Nunavut today, Zarei was ushered in to meet parliamentary secretary to the prime minister Greg Fergus instead.

Zarei is accompanied by family members of other victims from Flight 752 who held photos of their loved ones and remain outside the Prime Minister’s Office.