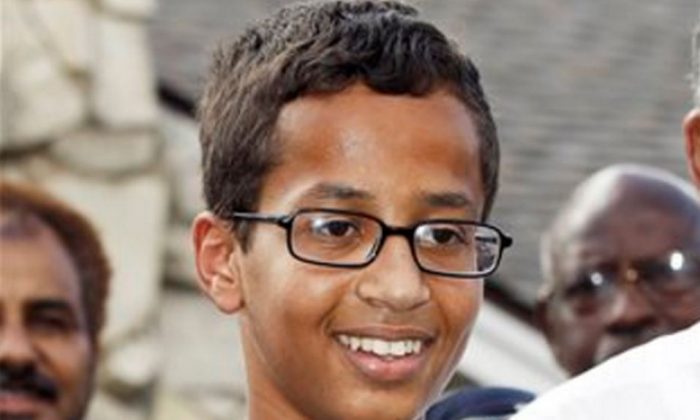 Ahmed Mohamed, 14, thanks supporters during a news conference at his home, in Irving, Texas. (AP Photo/Brandon Wade)
US

DALLAS—The father of a Muslim boy arrested after taking a homemade clock to his Dallas-area school has sued conservative commentator Glenn Beck and a Texas mayor alleging they falsely portrayed the family as terrorists.

Mohamed Mohamed filed the defamation lawsuit Sept. 21 in Dallas on behalf of himself and his 14-year-old son, Ahmed. Irving Mayor Beth Van Duyne (dyn) is among those named in the lawsuit.

The lawsuit seeks a retraction, a jury trial and unspecified damages related to comments following the teen’s September 2015 arrest at an Irving school. A charge of having a hoax bomb was later dropped.

The lawsuit describes the Mohamed family as “peaceful Muslims” falsely accused of being terrorists.

“The Mohamed family are peaceful Muslims who have been falsely accused of being terrorists and engaging in a jihad,” the suit stated. “The correction must also be made that the arrest and suspension of Ahmed Mohamed was not a stunt and it was not pre-planned, staged or engineered by anyone, including [his father].”