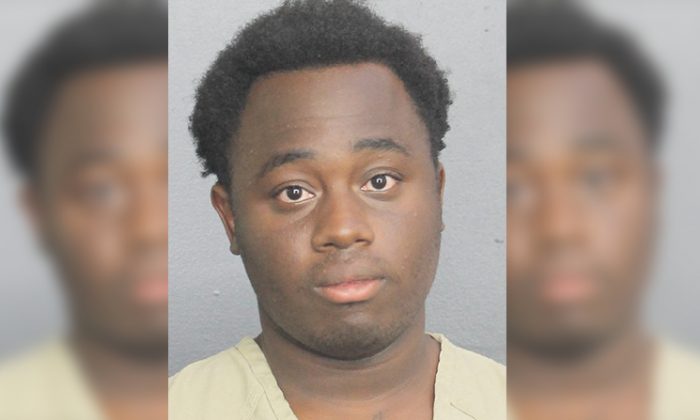 Tyrone Fields Jr. turns himself in on July 20, 2018. (the Broward County Sheriff’s Office)
Crime and Incidents

Father of 2 Florida Shooting Survivors Killed, Suspect Turns Himself In

A man who killed the father of two Florida high school shooting survivors after an armed robbery turned himself in on Friday, July 20.

Tyrone Fields Jr., 19, from Deerfield Beach was arrested on July 20, Two days after he allegedly had killed 61-year-old Ayub Ali, the Broward County Sheriff’s Office announced in a news release.

He was charged with one count of murder and another count of robbery with a firearm.

Ali was a father of four. Two of his children, a son and a daughter, survived the Marjory Stoneman Douglas High School shooting on Feb. 14, 2018, in which 17 people died, WFOR-TV reported.

The robbery and shooting happened in a local store named Aunt Molly’s Food Store around 12:40 p.m. on July 17.

In a surveillance video from police, a man—who was later identified by the authorities as Fields—is spotted putting a black object to Ali’s back, following him around the counter, taking money from the register, and then leaving.

Ali can be seen putting his hands up at one point. The security camera footage doesn’t show any struggle or fight during the armed robbery.

But shortly after Fields left with money, he returned and shot Ali, police said. The Tamarac Fire Rescue transported Ali to Broward Health Medical Center and he was pronounced dead there.

A family member of the victim told WFOR-TV that Fields got away with $500 in cash.

Who is this person? Around 12:40 p.m. July 17, our homicide detectives say he robbed and killed Ayub Ali at Aunt Molly's Food Store in North Lauderdale. pic.twitter.com/2VDoztwWnP

Fields turned himself in at the Fort Lauderdale Police’s station at about 12:30 p.m. on July 20. Police said Frields’s friend—who had seen the surveillance footage police released to the public—encourged him to meet with authorities.

He was held in jail without bail.

The case is still under investigation, anyone with further information is encouraged to contact with the Broward County Sheriff’s Office Homicide Detective James Hayes at 954-321-4231.