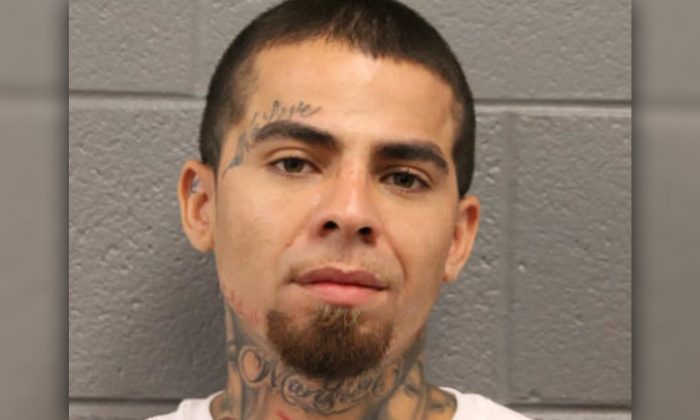 A 29-year-old man arrested on charges of sexually assaulting a 12-year-old girl was caught when the victim’s father lured the accused pedophile into a trap and held him at knifepoint.

Cook County prosecutors, cited by the Chicago Sun-Times, said Danny Garay sexually assaulted the girl twice in early August while in the company of the victim’s 19-year-old relative.

They allege Garay met the 19-year-old online and arranged to meet. The 12-year-old was also present during their encounters and at one point Garay allegedly demanded sex from the juvenile, which she declined. He then allegedly assaulted her.

Fox13 reported that Garay was taken into custody on Sept. 4 after being ensnared by the 12-year-old’s father, who pretended to be her in responding to Garay via text message, ostensibly accepting an offer of sex.

When Garay arrived at the home expecting to meet the underage girl, her father reportedly held him at knifepoint until police arrived.

Chicago police records cited by the Sun-Times indicate Garay, who works as a hairstylist and has no prior felony convictions, has been charged with two counts of predatory criminal sexual assault.

Garay is being held without bail.

In June, Alabama Gov. Kay Ivey (R) signed a bill into law that requires child sex offenders to be chemically castrated as a condition of parole.

House Bill 379 (HB379) was passed by the Alabama State Legislature in early June, calling for mandatory “chemical castration in addition to any other penalty or condition prescribed by law.”

The chemical castration procedure involves taking a drug, “medroxyprogesterone acetate or its chemical equivalent” either by tablets or injection, to suppress or block the body from producing the hormone testosterone.

Dr. Frederick Berlin, founder of a sexual disorders clinic at John Hopkins University, said in a 2016 interview with CBS News that sometimes lowering testosterone levels can help reduce libido and sexual urges, and may influence recidivism.

But not all sex offenses are sexually motivated. Berlin explained: “There are many sex offenders who aren’t driven by intense sexual urges. Some of these folks have other mental health issues, so it could just lull us into a false sense of security.”

Other states have also considered chemical castration for child predators. In California, a bill passed in the 1990s for repeat child sex offenders. Similar measures exist in other states, including Florida, Louisiana, Montana, Oregon, and Texas.