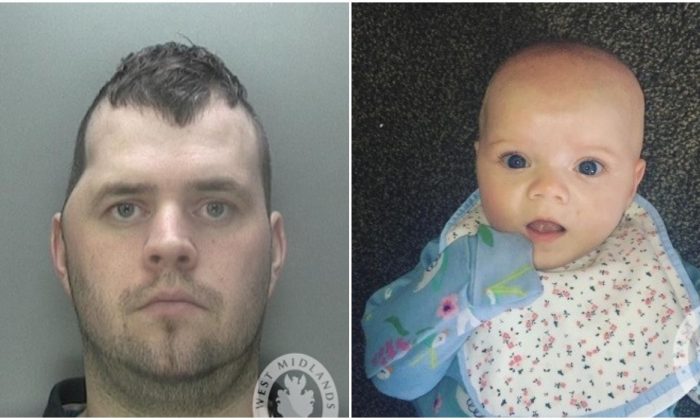 A father has been jailed for life for shaking his baby daughter to death in an “unexplained” attack when he looked after her for the first time.

Neil Smith was “intent on watching a football (soccer) match” when he was left alone with his 4-month-old daughter, Hope Sofia, in the family home in Birmingham, England on Aug. 4, 2017.

But after just 40 minutes, he phoned his wife to tell her that the baby was “limp and lifeless.”

She rushed home, and Hope Sofia was taken to the local hospital where she was put on life support. The baby never recovered, and three months later, her life support was switched off.

Smith was found guilty of murder and sentenced to life in prison on Feb. 22, according to a police statement. Under British law, his “life sentence” means the 33-year-old  will serve a minimum of 13 years in jail.

Smith had been charged with murder after a post mortem showed catastrophic brain injuries consistent with being shaken or thrown onto a soft surface, or possibly both, said the police.

His wife, Nicola Smith, said that she could never forgive her husband.

“The date 4 August 2017, the day she was taken to hospital, was one of the worst days of my life but it got worse,” she said.

“Soon after Hope Sofia’s admission to hospital, doctors began to explain that she had suffered serious ‘non-accidental’ injuries and she was unlikely to survive them.”

The exact cause of death, and the reason for Smith’s actions were never revealed in the trial.

Detective Sergeant Nick Barnes, from the force’s homicide team, said: “We will never really know what caused Smith to turn so aggressive and violent against his own daughter.

“He appeared intent on watching a football match on TV that night and maybe the frustration of having to care for the needs of his own flesh and blood manifested itself.”

“But whatever the reason, there can never be any justification for leaving his very young daughter with catastrophic injuries. This has left a devastating impact on the rest of family who are still coping with their loss.”

Smith had previously been questioned on suspicion of assault. He suffered serious injuries of his own following an industrial accident in 2015.

Nicola said: “My daughter was perfect to me, I loved her, I still love her, my beautiful baby girl. When Hope Sofia was born it was like the last part of a puzzle fitting into place.

“I listened to the injuries he caused, graphically described by doctors and experts, during the trial. Her own father shook her so hard he killed her.

“I cannot forgive him for what he has done, I loved that man, I cared for that man, I loved him, for better for worse and in sickness and in health; but he snatched away our daughter’s life and has not been brave enough to accept it or to tell anyone why he did it.

“We cannot get closure because the question will always be, why did he do this?!

“I will miss Hope Sofia every day and I will miss experiencing the life she would have had, those things other mothers get to share with their daughters, the things you take for granted. She will miss all of the opportunities in life to be a daughter, a granddaughter and a sister.”