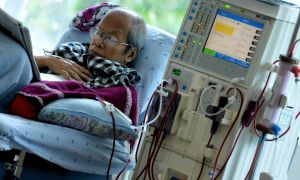 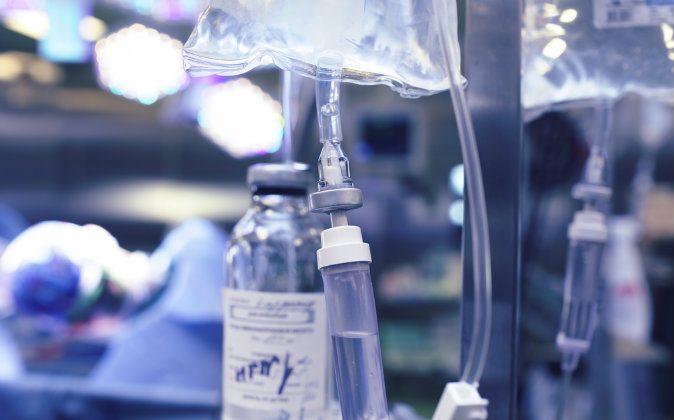 A file photo of an intravenous bag in a hospital. The process of putting people into a state of suspended animation involves pumping saline into the body to replace blood. (Shutterstock*)
Trending

A father went to drastic lengths to prevent doctors from pulling the plug on his son, who was brain-dead.

George Pickering II was charged with two counts of aggravated assault with a deadly weapon.

He went into Tomball Regional Medical Center in Houston, Texas, and got involved in an hours-long standoff with police. He also reportedly threatened hospital staff, according to Click2Houston.com.

Pickering’s son, George Pickering III, was on life support. He had a history of seizures and in January, he suffered a stroke. “They were saying he was brain dead, he was a vegetable,” said Pickering.

Doctors said there was no more hope and ordered a “terminal wean,” meaning that life support is slowly withdrawn to end a life.

“They were moving too fast. The hospital, the nurses, the doctors. I knew if I had three or four hours that night that I would know whether George was brain-dead,” Pickering Sr. told the news website.

“At that point, I had blinders on. All I knew I just needed to have this time with George,” said Pickering.

Pickering was initially disarmed by his other son and lied about having a second firearm. “I said, ‘I was in the Boy Scouts, you think I only have one gun?'” said Pickering.

The elder Pickering believed his son was misdiagnosed, saying, “During that three hours, George squeezed my hand three or four times on command.”

His son later came out of the coma and fully recovered.

The charges against Pickering were eventually reduced.

His son said, “There was a law broken, but it was broken for all the right reasons,” per MailOnline. “I’m here now because of it. It was love, it was love.”

“It’s the duty of a parent to protect your children and that’s all he did,” said Pickering’s son. “Everything good that made me a man is because of that man sitting next to me.”

According to FOX59, Pickering Sr. had admitted to being drunk that night.

After a few hours, he surrendered peacefully.

Tomball Regional Medical Center issued a written statement about the incident, saying they were concerned about his behavior.

“We appreciate the opportunity to be included in your story. Physicians use their medical knowledge and experience to develop a patient’s plan of care and these actions save lives each day. When a patient’s condition makes them unable to participate in their own care, the appropriate substitute decision-maker has the right to decide whether or not they will move forward with a recommended care plan. However, that decision must be expressed in a way that does not endanger other patients or caregivers. Due to strict privacy laws, we are unable to comment about individual patients, but we encourage you to contact local law enforcement for a complete picture of the events that took place,” it told the local website.