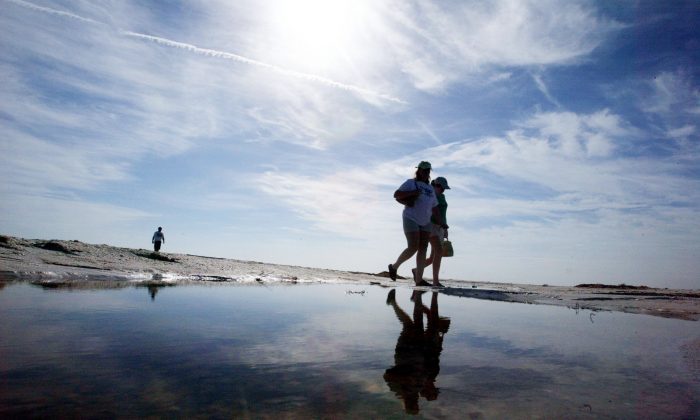 People walk on the beach on Sanibel Island, which neighbors Captiva, on Aug. 18, 2004. (Mario Tama/Getty Images)
US News

A father drowned rescuing his 8-year-old daughter from a rip current as they took a walk along an island sandbar in south Florida.

The body of Thomas Zakrewski, 46, was found several hours after he disappeared beneath the waves on the afternoon of July 9, according to Lee County Sheriff’s Office.

“A family walked along a curved sandbar on the shore of Upper Captiva when the mother, walking ahead of her family, glanced backward and discovered that her husband and 8-year-old child were struggling in the water.

UPDATE #2: The decedent from yesterday's incident in Captiva has been identified as Thomas Zakrewski (DOB 10/06/1972).UPDATE #1:The search for the missing male has ended as his body has been located. ORIGINAL POST:On Tuesday, July 9, 2019, the Lee County Sheriff's Office received a call for service at approximately 5:38 pm regarding a missing adult male swimmer.A family walked along a curved sandbar on the shore of Upper Captiva when the mother, walking ahead of her family, glanced backward and discovered that her husband and 8-year-old child were struggling in the water.Immediately, the mother jumped into the water and the father managed to pass the child to her. Unfortunately, the father continued to struggle and disappeared into the water.The Marine Emergency Response Team (MERT) was activated and a multi-agency search began immediately. The United States Coast Guard, FWC, Sanibel and Captiva Fire Departments joined the Lee County Sheriff's Office Marine Unit and Aviation Unit in the search for the missing male.Rough waters and considerable wind continue to hamper MERT efforts.As of 9:15 pm, the team has yet to locate the missing man.Updated information will be provided when available.

Video footage shows multiple boats scouring the area with a helicopter in the air as rough water and wind hampered the searchers’ efforts.

His body was found before 10:30 p.m. that day, according to an update by the sheriff’s office.

No further details on Zakrewski or the incident have been provided by the sheriff’s office.

Rip currents have already claimed the lives of 28 people this year, with 12 of those deaths in Florida alone, according to the National Weather Service.

“Rip currents are channeled currents of water flowing away from shore at surf beaches,” according to a National Weather Service factsheet (pdf). “They typically extend from near the shoreline, through the surf zone, and past the line of breaking waves.”

Rip currents appear on many beaches.

“Sometimes they are too slow to be considered dangerous. However, under certain wave, tide, and beach shape conditions the speeds can quickly become dangerous. Rip currents have been measured to exceed 5 mph, slower than you can run but faster than you or even an Olympic swimmer can swim.”

Last year a Florida mother died trying to save her children from a rip current.

Samar Aboukhdair, 36, was watching eight children—six of her own and two others—on Oct. 13 at St. Pete Beach in Pinellas County when some of them were caught in a rip.

She rushed into the sea to try to rescue them.

Firefighters eventually were able to pull the children and Aboukhdair from the sea, according to the Pinellas County Sheriff’s Office, but she passed away at a nearby hospital.

The National Weather service offers the following advice on how to survive a rip current: