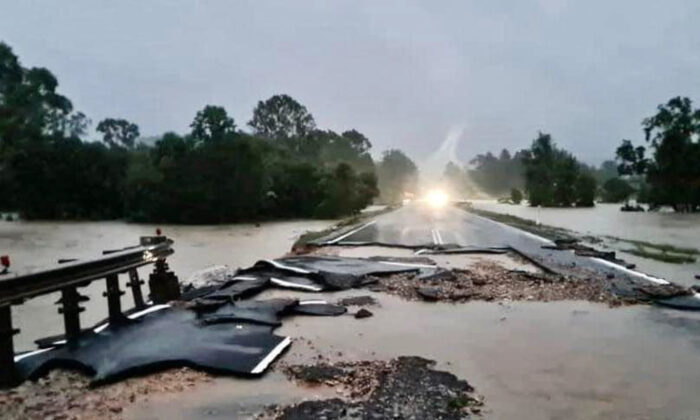 A father and his young daughter have been rescued after spending two nights clinging to a tree in regional Queensland after floodwaters hit over the weekend.

An RACQ LifeFlight Rescue helicopter crew from Toowoomba airlifted the pair from a homestead in the Gympie region to hospital on Sunday after they were found at around 1 p.m.

“The father explained to the crew that his car had been caught between two sections of floodwaters on Friday night and water began filling the car,” RACQ LifeFlight said in a statement late Sunday night.

“He and his primary school-aged daughter climbed onto the roof of the vehicle but were swept into the water in the darkness.”

They were washed into a tree, which they clung onto.

On the first night, the father swam back to the submerged car and grabbed a rope, which he used to tie himself and his daughter to the tree.

After the water subsided on Sunday morning, the pair climbed down more than 10 metres to the ground and made their way to the homestead to raise the alarm.

“They had suffered exposure, dehydration and a lot of insect bites,” RACQ LifeFlight said.

It was one of at least two flood-related missions in the Gympie region for chopper crews on the weekend.

On Saturday, a crew airlifted a man aged in his 50s who had been injured after he drove into floodwaters in the early hours of the morning.

But rescuers still hold grave fears for a 14-year-old girl swept away while fleeing a car caught in floodwaters with a 40-year-old man at Booubyjan, near Gympie, in the early hours of Saturday.

The man was found clinging to a tree hours later but the girl has not yet been found.

At least one person has died in the floods, which came after intense rain pummelled the region on Friday and Saturday.

A 22-year-old man’s body was found in a submerged ute at Kanigan, north of Gympie, on Saturday.

Water levels around the Mary River in Gympie remain high and roads have been washed out.

Meanwhile, the Queensland city of Maryborough was evacuated at the weekend after floodwaters surged into the city through the stormwater drains.

A levee was protecting the CBD until an underground stormwater mechanism failed just before 2pm on Sunday, allowing floodwater to surge up through the drains and into the streets.

Police and Queensland Fire and Emergency Services issued an urgent emergency evacuation order for more than 30 inner-city blocks, after the remnants of tropical cyclone Seth dumped 600mm on the Wide Bay-Burnett region in two days.

On Monday morning, Fraser Coast Mayor George Seymour said the water level peaked around 10 metres, which was below an expected 10.5 metres.

“We are waking up to relatively good news,” he told Nine Network.

The Fraser Coast Regional Council had set up 12 pumps, with each moving about 120 litres of water a second.

“We … were able to pump out a lot of the water as it was coming in underneath the barricade.”

Businesses in the city were due to access the damage on Monday.