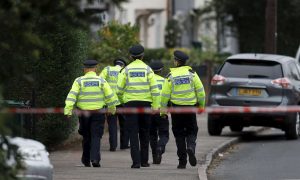 A New York father who has been charged in connection with the death of his newborn son told investigators that he got angry and threw him on the ground, according to court documents.

Christian Rodriguez, 24, has been accused of assaulting his one-month-old son Aiden Rodriguez, which resulted in several fractures to the infant’s skull.

Prosecutor Astrid Borgstedt told the New York Post that depending on the autopsy results, which are still pending, she would consider homicide charges before a grand jury.

According to the criminal complaint, Rodriguez told investigators that he was at the baby’s great-grandmother’s apartment at 10 p.m. on March 18, when the infant started acting fussy.

When Rodriguez got home, which was a few buildings away from the great-grandmother’s home, he told police that he bumped his son’s head against the door. He said, “He only hit his head one time,” according to the complaint.

He later changed his story allegedly telling police that he “accidentally bashed” the baby’s head against the door frame, the complaint said. The baby then started crying and “wouldn’t stop.”

The father told police he became angry when the baby wouldn't stop crying."I threw Aiden to the ground face first,"…

When Aiden arrived at Lincoln hospital that evening, he had no pulse and was not breathing. The CAT scan found that he suffered from several fractures in his skull, multiple brain bleeds, bruising to both sides of his head and “a 3-millimeter midline shift of the child’s brain,” reported the news website.

According to the Medical Examiner’s Office, Aiden’s cause of death was ruled a homicide caused by abusive head trauma, reported Fox 8.

Christian Rodriguez, a 24-year-old father-of-four, was arraigned in Bronx Criminal Court this afternoon on charges of…

Borgstedt said Rodriguez has a history of child abuse. In 2015, he pleaded guilty to a misdemeanor charge for another child who suffered two black eyes at three months old, reported NY Daily News. Police were called to a hospital where they found an infant girl with bruising around her face and nose.

Rodriguez told police, “I was holding the baby and I was getting frustrated and I dropped her,” according to court documents.

He hurled the baby to the floor in a fit of rage. https://bit.ly/2Cxq1AMAn early look at Thursday's front page…

Aiden’s great-grandmother, 58-year-old Maritiza Quinones, told the newspaper that the family was heartbroken over Aiden’s death.

“Aiden was a happy, smiling baby,” Quinones said. “He was just starting to babble. It’s too sad. We have broken hearts.”

She added that she hopes Rodriguez “gets at least 100 years. He murdered the baby, an innocent baby. We welcomed him into our family and he killed Aiden.”