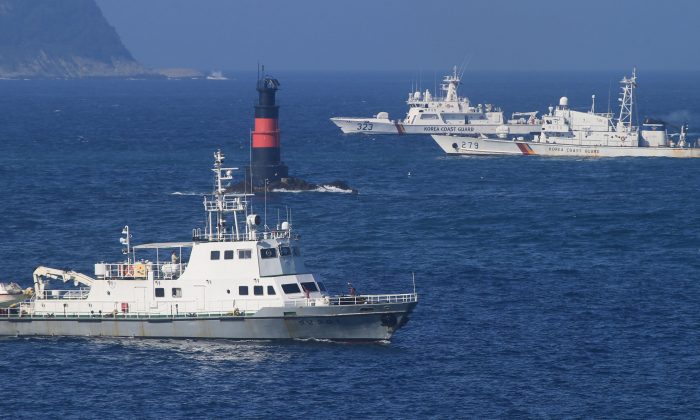 South Korean Coast Guard ships sail to search for missing passengers who were on a capsized fishing boat in the water off north of the resort island of Jeju, South Korea, Sunday, Sept. 6, 2015. (Park Ji-ho/Yonhap via AP)
US

Fate Unknown of Ship Caught in Hurricane Joaquin Off Bahamas

NASSAU, Bahamas—U.S. Coast Guard aircraft searched Saturday in the waters of the southeastern Bahamas for a cargo ship with 33 people on board that lost power and began taking on water as powerful Hurricane Joaquin roared across the sprawling archipelago.

The crew of the El Faro, 28 from the U.S. and five from Poland, reported that the ship was listing at 15 degrees before they lost contact with authorities as the ship passed near the lightly populated Crooked Island at the height of the storm. Coast Guard officials dispatched planes and helicopters to the area with the storm now moving to the northeast away from the Bahamas.

The 790-foot (241-meter) El Faro was heading from Jacksonville, Florida, to San Juan, Puerto Rico when it was battered by 20- to 30-foot waves (up to 9-meter) as Joaquin was a Category 4 storm. It has since weakened to a Category 3.

TOTE Services, the owner of the Jacksonville-based ship, said in a brief statement that it was working with the Coast Guard and trying to establish communication with the vessel.

Coast Guard officials said the search had covered about 850 square nautical miles before it had to be called off Friday because of darkness. They resumed the effort early Saturday, concentrating around Crooked Island and Long Island.

“Hopefully, today they will have a bit better vision as the hurricane heads north,” said Petty Officer John-Paul Rios, a Coast Guard spokesman in Miami.

The search area is vast and the effort is hampered by the fact that there are few vessels out there because of the rough weather, said Chris Lloyd, the operations manager of the Bahamas Air Sea and Rescue Association, which was not helping look for the ship because the area is beyond its reach.

“The fact that there has been no communications is not good news,” Lloyd said.

The vessel carried 685 containers and had an EPIRB on board, which transmits distress signals. An initial ping was received Thursday morning, but no new ones have followed, according to Chief Petty Officer Ryan Doss. He said it gave an initial location but did not continue transmitting, possibly because of bad weather.

“If it can’t break through all those clouds to reach the satellite, we’re not going to get a good fix on it,” he said, adding that the Coast Guard was proceeding with caution because of the weather and sea conditions. “We’ve got to keep our crews as safe as possible.”

There were three C-130 planes, one helicopter and a Navy airplane involved in the search.

The U.S. Coast Guard previously saved 12 sailors who were forced to abandon a sinking cargo ship late Thursday, hoisting them into a helicopter from a life raft in churning waters off northwest Haiti. In a Saturday statement, officials said they had accounted for all crew members on the Bolivian-flagged ship.

Lloyd said that several smaller vessels reported missing during the storm also had been located and their crews found to be safe.

As the threat of the storm receded on a path that would take it away from the U.S. mainland, people in the southeastern Bahamas were in cleanup mode. Joaquin destroyed houses, uprooted trees and unleashed heavy flooding as it hurled torrents of rain, and officials were investigating reports of shelters being damaged and flooded.

There had been no reports of fatalities or injuries so far, said Capt. Stephen Russell, the director of the Bahamas National Emergency Management Agency.

The Bahamas government said it was inspecting airports first for damage and would later look at other infrastructure, adding that it would take time to compile information about overall damage from numerous islands. Officials have already reopened more than a dozen small airports across the island chain.

Hurricane and Rainstorm Are Locked in a Dangerous Dance

Early Saturday, the storm was centered about 165 miles (270 kilometers) northeast of San Salvador, Bahamas and was moving northeast near 13 mph (20 kph). It had maximum sustained winds of 125 mph (205 kph), according to the U.S. National Hurricane Center.

Rick Knabb, director of the hurricane center, said Joaquin was expected to pass well offshore from the eastern seaboard.

“We no longer have any models forecasting the hurricane to come into the East Coast,” he said. “But we are still going to have some bad weather.”

In addition, the entire East Coast will experience dangerous surf and rip currents through the weekend, he said.

“Joaquin is going to generate a lot of wave energy,” Knabb said, adding that Bermuda might issue a tropical storm or hurricane watch, depending on Joaquin’s path.