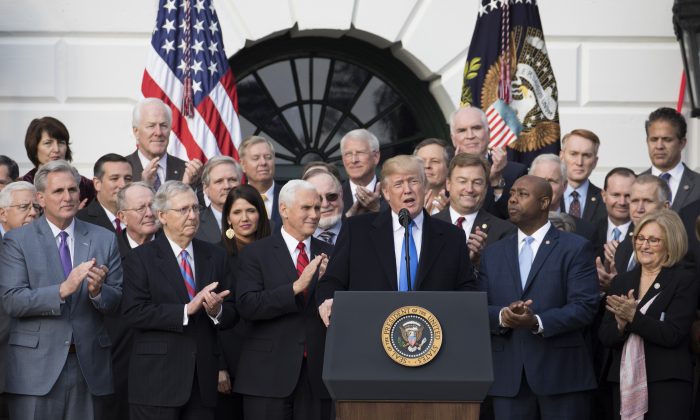 What Will Happen to the Trump Tax Cuts?

The tax reforms of 2017 made substantial changes to business taxes, including a permanent reduction of the corporate income tax rate, from 35 percent to 21 percent.

Starting this year, however, some provisions of the tax law will expire, which will have an impact on corporate investment decisions. While Republicans want to maintain these measures, tax experts foresee a political battle after the November midterm elections over whether or not to keep them.

The Tax Cuts and Jobs Act (TCJA) permitted a 100 percent bonus depreciation, which allowed companies to immediately deduct the full cost of most business investments, such as equipment and machinery. This is one of the most significant provisions in the tax law that incentivizes companies to invest, according to the right-leaning Tax Foundation. The provision is set to begin phasing out after the end of 2022, and will fully expire by the end of 2026.

Other changes in the tax code affecting businesses this year include a switch to five-year amortization of research and development (R&D) expenses rather than an immediate write-off and a tighter interest deduction limitation. These changes are projected to deter business investments.

According to a new report by the Tax Foundation, making these tax incentives permanent would boost long-term economic growth by 0.6 percent and national income by 0.5 percent. In addition, it would increase wages by 0.5 percent and create 105,000 new full-time jobs.

If Congress fails to extend these provisions, it’ll “increase tax burdens on businesses at a time when economic headwinds and broader uncertainty are higher than they have been in decades,” the Tax Foundation experts warned.

The midterm elections are crucial, because if Democrats retain their congressional majorities, they have pledged to let the tax incentives expire, whereas Republicans have promised to make them permanent.

The overhaul of the federal tax code in 2017 is regarded as the Trump administration’s signature legislative achievement. It provided substantial tax cuts for both individuals and businesses.

On the fifth anniversary of the passage of the TCJA, Rep. Kevin Brady (R-Texas), the ranking member on the House Ways and Means Committee, released a new report on the impact of the tax cuts.

One year after the law went into effect, “the growth in wealth of lower-income families outpaced that of the upper-class for the first time since 2007,” the report said, adding that the tax cuts led to the lowest jobless rate in 50 years and the strongest wage increase in a decade.

According to Garrett Watson, senior policy analyst at the Tax Foundation, the midterm elections will be critical in determining the future of the business tax breaks.

Given the economic benefits of these incentives, Watson believes there is bipartisan interest in extending or making them permanent, particularly the R&D tax incentive.

And a deal can be reached after the election, he noted, pointing to the compromise deal in 2013 during the Obama administration that made the Bush tax cuts permanent for households earning less than $400,000.

“The big question will be if there is going to be a pairing of business taxes with some sort of expansion of social benefits,” Watson said.

A big challenge, he noted, is that Democrats are pushing for proposals such as “the Biden version of the child tax credit, which will cost north of $1.5 trillion over the next 10 years.”

That is far greater than making all of the expiring business tax provisions permanent, he said.

According to the Institute on Taxation and Economic Policy, a left-leaning think tank, any tax deal should include extending the expansions in the child tax credit.

The White House, meanwhile, blames Republican congressional leaders for wanting to keep Trump’s tax cuts, stating that they are driving up prices.

“The tax cuts would increase inflation and fight the Federal Reserve’s effort to bring inflation down,” a senior administration official told reporters on Oct. 26.

When asked if the Biden administration intends to keep some of the tax incentives that are about to expire, the official did not provide a clear answer.

The president has proposed many tax reforms as a means of paying for his investments, the official responded. Instead of extending all the tax incentives without offsets, the president’s aim is “to make the tax system more equitable over time,” she said.

The TCJA also made substantial changes to individual income taxes and the estate tax. If not made permanent, almost all of these measures will expire after 2025. Tax rates could revert to 2017 levels in 2026, resulting in a greater tax burden for many families.

The fate of individual taxes will be determined by political control in 2025, making the 2024 election more crucial from a tax standpoint, Watson said.