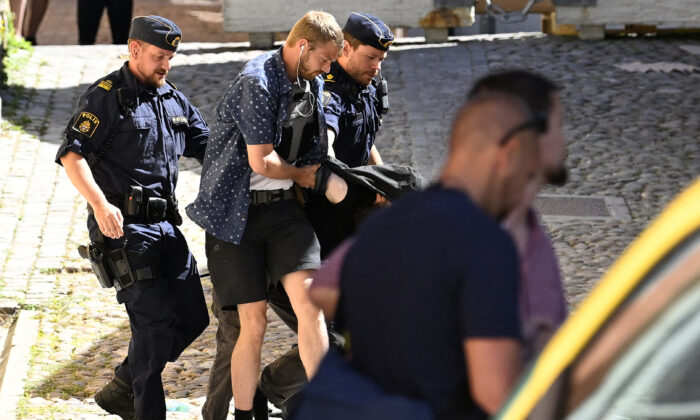 Police arrest a man (C hidden) suspected of seriously injuring by stabbing a woman at the Almedalen political festival in Visby on the Swedish island of Gotland on July 6, 2022. (Henrik Montgomery/TT News Agency/AFP via Getty Images)
Europe

STOCKHOLM—The killing of a woman at an annual political event in Sweden earlier this month is now being investigated as an act of terror, authorities said.

Sweden’s domestic security agency, known by its acronym SAPO, said that the 32-year-old man who is in custody over the July 6 knife attack is now suspected of “terrorist crimes through murder,” meaning SAPO has now taken over the investigation.

Agency spokesman Gabriel Wernstedt told Swedish broadcaster SVT on Monday that “information has emerged that has led to the new suspicions.” Wernstedt declined to give further details.

The suspect, identified by Swedish media as Theodor Engström, was detained on the spot, and has confessed to the killing. SVT reported he has links to the neo-Nazi group NMR, the Nordic Resistance Movement.

The victim, 64-year-old Ing-Marie Wiselgren, was a medical doctor and psychiatric coordinator for Sweden’s municipalities and regions.

There is no other suspect in the case, SAPO said Monday.

The Almedalen Week is an annual event attended by leading politicians from different parties, lobbyists, pressure groups, and interested members of the public. It takes place in and around Almedalen, a park in Visby, the main town of the island of Gotland, and features debates that are more informal than the ones in parliament.