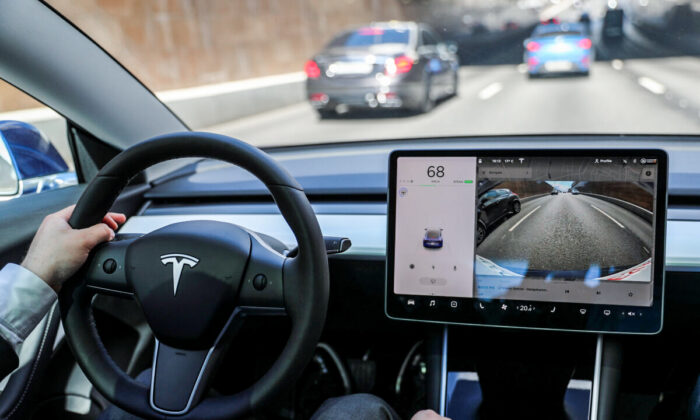 The interior of a Tesla Model 3 electric vehicle is shown in this picture illustration taken in Moscow on July 23, 2020. (Evgenia Novozhenina/Reuters)
Europe

A major taxi company in Paris, France, has suspended the use of Tesla Model 3 cars in its fleet after a fatal weekend crash involving one of the vehicles left one person dead and seven seriously injured, according to French media reports.

G7, the biggest taxi company in Paris, has suspended the use of 37 Tesla Model 3 vehicles after an off-duty driver lost control of the vehicle on Saturday, striking several pedestrians before crashing into a van, according to French outlet Le Parisien.

Tesla has not returned a request for comment from The Epoch Times on the G7 decision to suspend the use of the Model 3.

Yann Ricordel, chief executive of G7, was cited by Reuters as saying that the driver hit the brakes but the vehicle instead accelerated.

Jerome Coumet, mayor of Paris’s 13th district, said on Twitter that initial findings suggest a stuck accelerator, adding that more will be known once the police conclude their investigation into the crash.

Reuters reported Ricordel citing Tesla as saying that a preliminary inquiry into Saturday’s accident ruled out a technical problem with the vehicle, while France’s transport minister said Wednesday there was no indication at this stage that the crash was caused by a technical fault.

“Today, we have two divergent views on the subject,” Ricordel said, according to Reuters. “We will maintain the suspension of the Tesla Model 3 while the investigation is ongoing, as a safety measure for our drivers, customers, and other road users.”

It remains unclear if the car was operating in Autopilot mode, with the partially automated driving system the subject of an unrelated inquiry by the U.S. National Highway Traffic Safety Administration (NHTSA) after a series of collisions with parked emergency vehicles.

The agency said in an Aug. 13 document (pdf) that it had identified 11 crashes in which various Tesla models approached locations where emergency crews were responding to incidents and struck one or more vehicles at the scene. A total of 17 people were injured in the crashes, and one person was killed.

Most of the crashes took place after dark and involved scenes where first responders used flashing lights, flares, an illuminated arrow board, or cones warning of hazards. All involved Tesla vehicles were confirmed to have been engaged in either Autopilot or traffic-aware cruise control as they approached the crashes.