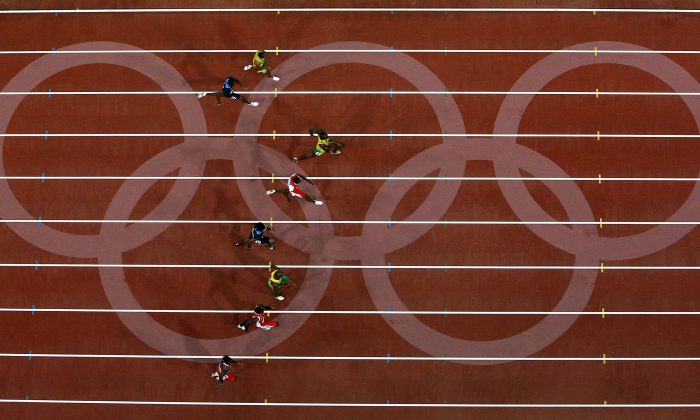 Usain Bolt of Jamaica leads the field on his way to winning the Men's 100 meter final in Beijing on Aug. 16, 2008, in Beijing, China. (Ezra Shaw/Getty Images)
US Features

A 7-year-old boy has smashed the record for the 100-meter dash, caught in a viral video by his proud father who dubbed him the “fastest kid in the world” after he covered the distance in just 13.48 seconds.

But even if he could ever get near Bolt’s record time of 9.58 seconds, Blaze doesn’t dream of glory on the track—but glory on the football field.

And like many professional football players these days, the Florida boy already has the social media following to match his skills, with over 300,000 followers on Instagram, and rising.

A recent video posted to his Instagram account—apparently managed by his dad—shows Blaze leave his fellow competitors in the dust as he tears down the 100m track.

According to ABC Action News, that 13.48 seconds. dash put him in the record books as the fastest time in USA Track and Field records for his age group.

Asked what his dream was, he told ABC, “To get into the NFL.” He hasn’t picked a team yet, however.

Blaze’s father is an American football coach, reports the Daily Mail, who said he wants to let Blaze be a child, but also wants to help him set the stage for his future.

His dad said that Blaze has been training since he was aged 4 when he was inspired by the Rio Olympic games.

His father, Rudolph Ingram Sr., wrote in the caption: “Proud To Say My Son Maybe The Fastest 7 Year Old In The World. To The Top Love All Those Hours Of Training Payed Off.”

Anything is possible if you don’t give up, he tells Blaze.

A year ago, when Blaze was just 6, his talent had already been spotted by the coach of his football team, the Tampa Ravens.

Coach Jimmy Watson told Youth1 that he was stunned at the impact Blaze brought to the team.

“At running back you can count on him to put the team on his small back and carry us to the promise land. At safety it’s unbelievable how he can make plays in the backfield. At running back he’s very fast but even more elusive. The kid has vision like I’ve never seen in a 6-year-old before,” Watson said.

“One second he’s going one way and then you blink and he’s going another way. He stops on the drop of a dime And runs so aggressive. The kid is one in a million at safety,” Watson said.

His father said that Blaze sets himself apart with his “drive and work ethic and competitive mentality,” reported the Week.

Blaze is no slouch in the classroom either. A school report card posted to his social media account is full of As and Bs.