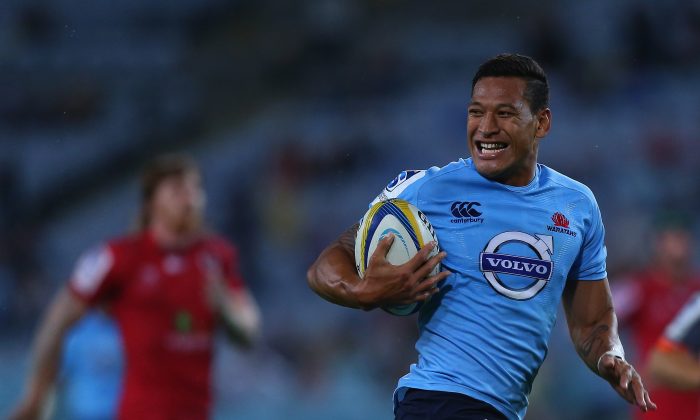 Waratahs fullback Israel Falou laughs his way to the try-line. His team defeated the Reds 32-5 in the round three Super Rugby match on Mar 1, 2014, at ANZ Stadium in Sydney, Australia. (Joosep Martinson/Getty Images)
International

Fast Starting Waratahs Have Super Rugby History Against Them

As always, the Waratahs from Sydney have stormed out of the blocks and lead the Super 15, after thrashing the Queensland Reds 32-5.

Rugby league convert Israel Folau has scored five tries in two matches. He said: “As a team we are pretty confident, obviously.”

Meanwhile, Perennial bad boy Kurtley Beale has returned to the Waratahs backline after an incident-riven stint with the Melbourne Rebels. And the forwards have been strengthened by former Springboks Jacques Potgieter.

Beating their arch-rivals the Reds 32-5 on Saturday (Mar 1) suggests the two-game swallow may be an indication of a summery season. But past years have seen a similar start – only to be followed by a humiliating slump, which lead to players being booed from the field.

Some flaws are apparent, despite their triumph. Half-back Nick Phipps has started well, but he is inconsistent. The super-reliable centre Adam Ashley-Cooper still fails to pass when he has unmarked players outside him. And the rampant pack tends to become lamb-like when the heat goes on, late in the competition.

By contrast, the All Blacks stacked Crusaders usually start slowly, then power home as their stars find form ahead of the international matches. So too this year; the most successful Super side has two losses from two games, to be placed second-to-last with no competition points.

Last Saturday they lost to last year’s bumbling Auckland Blues, after racing to an early 17-3 lead. This year Blues coach Sir John Kirwin seems to have created a working mix of Polynesian flair and NZ pragmatism.

In a matter of minutes, they blasted the Crusaders out of the game. Blues winger Frank Halai flew through the Crusader defence to score. Then, from the kick-off his wing partner Tevital Li, burnt the defence with similar pace to score.

Suddenly the Blues were playing with the swagger that once made them one of the great Super sides. Ageing former All Black Piri Weepu epitomised this, delicately grubber-kicking from the base of the scrum to give a try to Jackson Willison.

To make matters worse for the Crusaders, captain Ritchie McCaw broke his thumb, and fans are howling for the head of coach Todd Blackadder—while calling for the return of former coach, and lately former Wallabies coach, Robbie Deans.

Meanwhile, last year’s champion, the Chiefs, defeated fellow Kiwis the Highlanders 21-19 in Hamilton. The Highlanders, who were poor last year, dominated the Chiefs for most of the game. But the Chiefs need little possession to score points.

The Chiefs are jointly captained by loose forward Liam Messam and flyhalf Aaron Cruden – both appear to be enjoying the additional responsibility.

Sitting just behind the Waratahs on the table are the top South African side the Sharks. They are coached by World Cup winning coach Jake White, who returned home early after a successful stint with the Brumbies in Australia.

White’s return reunites him with his World Cup Springboks captain John Smit, who is the new chief executive of the Sharks.

The South African media is already predicting that the Natal Sharks will top the SA conference – and probably win the competition.