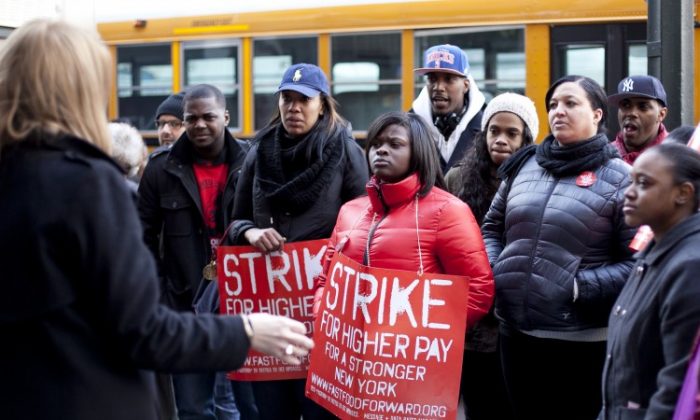 The workers are calling for higher wages, greater respect, and a minimum number of hours that cannot be cut at an employer’s will. New York state employs nearly 1.6 million low-paid workers.

The strikers, estimated at around 400 to 500, were helped by grassroots supporters at an estimated 50 to 70 locations. New York Communities for Change, UnitedNY and Service Employees International Union (SEIU) are the main organizers behind the movement which is united under the campaign Fast Food Forward.

“Low wage workers are constantly taking the short end of the stick,” said Adam Obernauer, an organizer for UFCW Local 1500, which is one of between 10 to 15 unions supporting the strikers, some of whom also rallied for unionization of the trade. AFL-CIO president Richard Trumka was with workers at a Wendy’s on 34th Street.

A Burger King in the Bronx was unable to open on time early this morning due to the striking workers. At other locations, a few workers walked out to join the rally, likely on break, while those with the day off toured various locations throughout the day.

Around midday, workers gathered at a Dominos and a Burger King located across the street from each other at 116th and Harlem, between Lexington and 3rd Street. Around 50 workers at one location chanted “we can’t survive” to those on the other side of the road who answered “on $7.25,” according to Obernauer.

A major rally and march is planned for 5:30 p.m. at Marcus Garvey Park, at 124th Street and Madison.

Obernauer said fifteen dollars is important because it represents a living wage in New York City.

New York state legislators passed a minimum wage increase in its 2013 budget that will bring the rate to $9 within 3 years. Obernauer said this is a step forward, but $9 today is not the same as $9 in 3 years, and nobody can live with pay that low.

Still, he credited the minimum wage victory for mobilizing and engaging New Yorkers about the problem of worker pay, and “shifting the conversation” over the last 1.5 years.

A petition campaign hosted by Fast Food Forward has attracted 116,879 signatures. The petition is addressed to the CEOs of Wendy’s, McDonald’s, Pizza Hut, Domino’s, KFC, Taco Bell, and Burger King.

“These corporations reap huge profits and shower CEOs with exorbitant compensation while most of their employees qualify for food stamps,” stated Fast Food Forward.