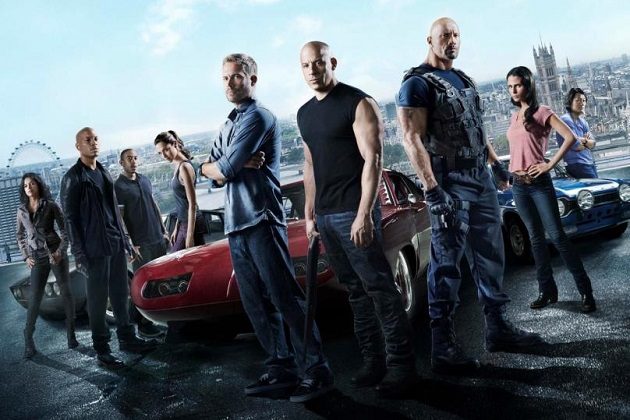 The movie poster for "Fast and Furious 6." Paul Walker's character Brian O'Conner (front left) will likely be killed in "Fast and Furious 7," joining Gisele Yashar (to the left of O'Conner), and Han (far right) as members of Dominic Toretto's family that have been killed. (Universal Pictures)
Entertainment

Walker died on November 30 in a car crash while on a break from filming.

A source told Hollywood Reporter that Walker had filmed about half of the scenes that his character was in, leaving producers in a conundrum following the death.

A conference call was held between executives the morning after the death to contemplate the next steps. “Fast & Furious 7” was originally supposed to hit theaters on July 11, 2014, but that date has likely been pushed back because production is stopped until at least mid-January.

Because Walker’s character was in the entire film in the original version, it means the scenes he filmed were spread throughout the film, making a relatively major revision necessary.

Though there have been descriptions of the revision as “retiring” Brian O’Conner, fans have pointed out that it would make more sense for him to die, because of the plot that is known so far.

At the end of “Fast and Furious 6,” it was revealed that Han was actually killed by Ian Shaw (Jason Statham), who is Owen Shaw’s older brother. In “Fast & Furious 7,” Ian Shawn seeks revenge for the death of his brother.

As one fan pointed out, it would fit into the narrative to also have O’Conner killed by Shaw in his path of revenge. Shaw is ultimately after Dominic Toretto (Vin Diesel), but is aware of Toretto’s crew and how close they are.

Toretto and the crew set out to find Shaw after they find out Han is killed, and are joined by several of Han’s friends from “Tokyo Drift:”  Sean Boswell (Lucas Black), Twinkie (Bow Wow), and Neela (Nathalie Kelley). O’Conner could die during the hunt for Shaw.

The rest of the cast isn’t set into stone but many of the regulars are believed to be coming back, such as Dwayne “The Rock” Johnson (Luke Hobbs); Tyrese Gibson (Roman Pearce); and Michelle Rodriguez (Letty Ortiz).