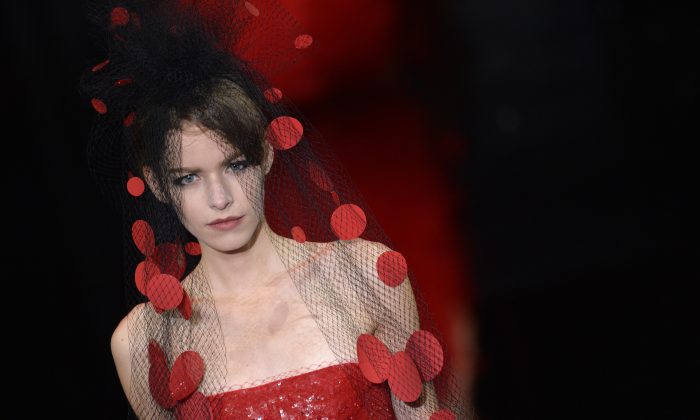 Textures took on an air-bending quality in the Armani Prive Fall 2014 Couture collection. And what better color to cut the space around the body and ‘scintillate’ with than bright, true red? Set against the pitch black surrounding the effect was otherworldly.

A few gowns had red flecks juxtaposed onto black with a smoldering effect—the perfect ensembles for a restless widow with lots of time and castles in which to hold charity balls.

If Chanel invented the suit, Armani definitely took the idea to its apogee. Micro shorts, pleated a la 1980s so that they billowed slightly, counterbalanced the A-line jackets with pointed or rounded shoulders.

The long evening gowns were undoubtedly more forgiving on older clients, no matter how sprightly their legs. Armani played with organza, tulle and polka-dots, the latter used either as cosmic sprinkles or huge flat dots that appeared to be floating in the air, on the nearly invisible black net.

Red, red, and more red ruled. One coat seemed an amorphous mass of red net bunched to give the effect of fur and, yet, it retained the impeccable proportion which Armani so constantly nails.

His current haute couture collection is testimony that no matter how far Armani pushes the limits, his devotees will follow because of his near perfect sense of proportion.

This is his mastery—because of it, the human body remains imposing no matter how many layers of red tulle surround it, blurring the line between space and matter but never between the personality and the dress. The caveat here is that one must have the personality to carry it off.

The collection was true to the house DNA—his DNA—which, in retrospect of Armani’s body of work through the decades must encompass the principle that no matter what is sacrificed for the sake of novelty, elegance can never be forsaken.

It was Diana, the goddess of the hunt, that Valentino designers Maria Grazia Chiuri and Pierpaolo Piccioli chose to invoke down to her knee-high gladiator sandals, in this year’s fall couture collection. The first model emerged literally out of the woods as the closest embodiment of the goddess herself, wearing her statuesque tunic—albeit longer.

The high waist was then synthesized and emphasized by a leather ribbon wound around coats and dresses appliqued with leather flower motifs. This is what the wood nymph might wear to an art exhibition opening.

Highlights included a nude organza dress with sparse and striking embroidery on the torso and an ivory coat and dress ensemble with wrought iron motifs punctuated with metallic studs. The other organza dress to note was in forest green-pleated, ruched and tied together by the ubiquitous black leather ribbon, it was poetry in motion.

The collection lost nothing of its overall air of restrained opulence even with the gold lamé coat that was embroidered with every conceivable bead and thread, worn over a sheer dress also laden with beading and paired with gold gladiator sandals. It was the lavish and perhaps necessary high-point, also an ode to otherworldly riches.

But the most unique and memorable ensemble remains the ivory dress and shorn fur coat in the same color with the strong graphic motifs of naïve art tulips and leaves. Peaking through from underneath, the lining was gold as well. The coup de grace: pony hair gladiator sandals-knee high of course. Goddesses don’t feel the cold.

Apart from the simpler organza gowns, other pieces in the collection would be so memorable that they would undoubtedly compel its owner to banish the garment to her closet for at least a decade before it can be seen with fresh appreciation. Perhaps this is the other downside of haute couture—apart from the exorbitant pecuniary loss.

Still, it is important and comforting to know that the legacy of exquisite hand-made fashion endures.