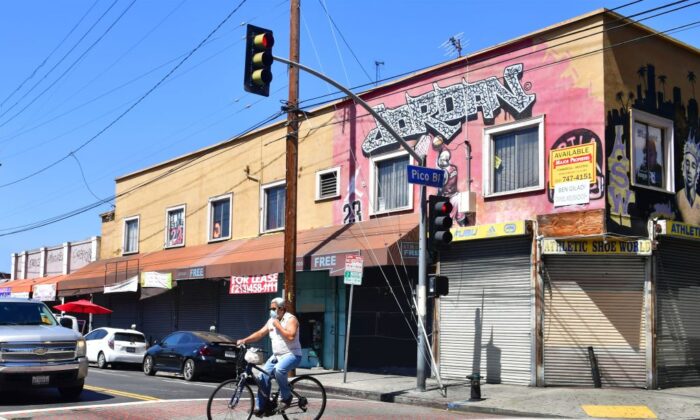 A man adjusts his face mask riding past closed shopfronts in Los Angeles on May 4, 2020. (Frederic J. Brown/AFP via Getty Images)
Southern California

LOS ANGELES—A Fashion District clothing company owner was sentenced Dec. 6 to a year in federal prison for scheming to undervalue imported garments and avoid paying millions of dollars in duties and taxes to the United States.

Ambiance Apparel owner Sang Bum “Ed” Noh agreed to forfeit $81.5 million as part of his plea deal, according to the U.S. Attorney’s Office.

The 67-year-old Bel Air man pleaded guilty last year to one federal count each of conspiracy and filing a false tax return.

In the customs fraud scheme, Ambiance imported clothing from Asian countries and submitted fraudulent invoices to U.S. Customs and Border Protection (CBP) that undervalued the shipments and allowed Ambiance to avoid paying the full amount of tariffs owed on the imports.

The first invoice, which fraudulently reduced the value of the shipment, was submitted to the CBP and was used to calculate the tariffs due on the imports, prosecutors said.

Over the course of four and a half years, Ambiance undervalued imports by about $82.6 million and failed to pay more than $17.1 million in tariffs, according to the government.

In the second scheme outlined in court papers, Ambiance admitted it failed to file reports with the Secretary of the Treasury documenting cash transactions of more than $10,000.

Ambiance employees received 364 payments of more than $10,000 over a two-year period, totaling more than $11.1 million, and the company failed to file the required Form 8300 to alert federal authorities to the transactions, prosecutors said.

The lower sales figures were reported on 2011 and 2012 tax returns filed by Noh. He admitted he failed to report income for those two years and owes the Internal Revenue Service a total of more than $16.8 million, which includes unpaid taxes, penalties, and interest, according to the U.S. Attorney’s Office.

Ambiance and Noh were ordered to pay more than $35 million in restitution owed to the Internal Revenue Service and CBP.