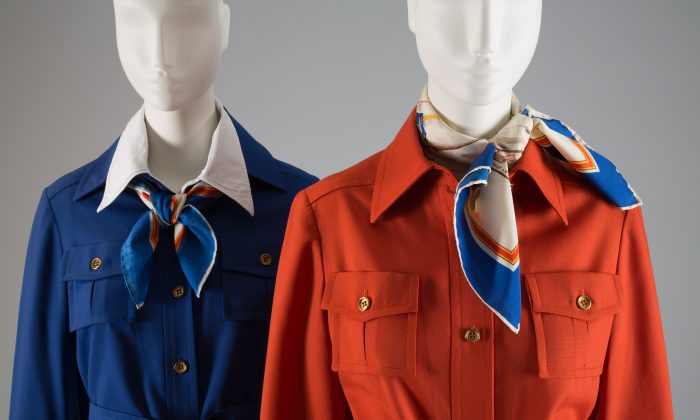 Fashion and the Uniform in America

NEW YORK—The uniform—u ni form n., one form for all members of a group—has been one of the most visually striking ways through which nations across the globe have been able to show their individual togetherness. From the battlefield to business corporations, the uniform has been playing the same role throughout millennia.

Uniformity, the new exhibition at The Museum at Fashion Institute of Technology (FIT), explores the aesthetics and social attitudes toward the uniform, as well as the ways in which fashion designers have used the uniform as inspiration.

According to exhibition organizer Emma McClendon, Americans have had a love-hate relationship with uniforms, particularly since the Vietnam War.

The exhibition features a number of U.S. Army and Navy uniforms from the 1940s onward, with interesting text notes.

For example the olive drab Women’s Army Corps, or “WAC’s” uniform issued during World War II was considered much less fashionable than the U.S. Navy’s WAVES (Women Accepted for Volunteer Emergency Service) uniforms. The WAVES uniforms, designed by American-born couturier Mainbocher, were made from navy blue wool, the same fabric as the male officers’ uniforms and were deemed more “becoming.”

Donning either uniform would show their sense of patriotism, but women apparently voted with their sense of fashion, and the WAC uniform was blamed for poor recruitment numbers in the Army Corps.

The Corporate World and Beyond

Uniformity, the exhibition, is organized thematically to focus on four main categories of uniforms: military, work, school, and sports. It also explores the way in which fashion designers have adapted elements of various uniforms into ready-to-wear as well as haute couture.

If there is one (unwritten yet well-understood) rule in uniform design, it is that it must be attractive enough so as to override our inherent need for self-expression through our clothes.

The 1970s was the decade when branding started to seep into business strategy in the United States.

Stan Herman became the go-to designer for big corporations—FedEx being one of them. In 1975 he designed the TWA airline uniforms injecting some long-needed color, namely bright orange and blue that are on display alongside his creations for McDonald’s. Herman was the first person to design uniforms for all of McDonald’s; prior to 1976, each McDonald’s franchise dictated what was worn by the employees of the company without a unifying concept.

“Herman took the logo, the advertisement, the design of the stores, and the McDonald’s sign and put it on the body of the workers so that they became an extension of the advertising—a walking billboard for the company,” said McClendon during the walk-through of the exhibition, just minutes before she was interrupted by Herman himself, who came to see the show and was enthusiastic to take a walk down memory lane. He is also featured in the exhibition video, explaining his love for uniforms, and recounting how he got to design such iconic garments.

While an haute couture designer might get away with dramatic design concepts that push the boundaries of wearability, designers of uniforms stand to have their careers promptly curtailed by the comparatively greater disgruntlement of an army of employees (and employers) should the uniform prove to be unpopular.

If there is one (unwritten yet well-understood) rule in uniform design, it is that it must be attractive enough so as to override our inherent need for self-expression through our clothes.

Those of us who find personal style more of a daily dilemma might revel in the freedom from such a chore offered by a well-fitted and authoritative uniform.

And worthy of consideration is also the view that uniforms don’t necessarily stifle one’s individuality, presumably because a uniform’s standardized form of dress places the focus back onto the individual wearing it, so that in a sea of identically dressed people, what becomes most noticeable is the person, not the clothes.

According to McClendon, it is important to define uniform—there is a distinction between a uniform, a dress code, and a personal or social uniform.

In the strictest sense, uniforms are a standardized form of dress that one is given and is required to wear as a member of an institution or organization, while a dress code is a set of rules that one is supposed to prescribe to as part of a job.

Fashion designers have always been keenly attuned to dress codes that communicate the values to which their customers subscribe.

Coco Chanel used military uniforms as inspiration and herself adopted a uniform—the cropped jacket. She wore it constantly, thus establishing it as a social uniform.

“With the Chanel jacket, wearing a social uniform [like that], you’re making yourself part of a style tribe, you’re putting on an ensemble to associate yourself with a group, or a lifestyle, that has been set by a designer,” said McClendon.

Current head designer and creative director of Chanel, Karl Lagerfeld, also took inspiration from the humble uniform—this time it was the Parisian brasserie waiter’s uniform in the brand’s 2015 fall collection.

All humility aside, Lagerfeld’s creations, such as the ensemble on show that he named Brasserie Gabrielle, features elements such as the short black jacket, the bow tie, the long white apron, and even the plates. Of course, the two plates with the intertwined C’s are a clutch, the white apron is a cascade of silk and cotton flounces, and the jacket is impeccably tailored and complete with trim and camellia-shaped buttons.

But possibly the most currently ubiquitous military pattern is the camouflage pattern that is hardly missing in U.S. street style, be in on underwear, cargo pants, jackets, or caps.

On view in this section is a U.S. Marine camouflage poncho and helmet cover from World War II, as well as high fashion versions of the print from designers such as John Galliano for Christian Dior and Michael Kors.

Kors made camouflage the central theme of his fall 2013 collection and subverted the idea behind the pattern by using blue, white, and gray, so as to make the pattern stand out rather than blend in. Kors’s ensemble is on display next to U.S. designer John Bartlett’s men’s ensemble from his spring 2011 collection. It is a tongue-in-cheek interpretation of traditional camouflage, using bright pink, orange, and red.

Uniforms have always fascinated fashion designers, despite their intrinsic functional rigidity, conformism, and lack of scope for personal expression—all attributes diametrically opposed to high fashion especially, or even ready-to-wear. Undoubtedly, the rigidity of the uniform’s visual lexicon makes it that much more satisfying to deconstruct and re-contextualize for an altogether different purpose.

The exhibition features over 70 objects from the museum’s permanent collection, many of which have never before been on view.

Viewing official uniforms side by side with some of the social uniforms and dress codes that we have adopted serves as a timely recapitulation of fashion trends and a chance to decode the source of some interesting design elements. Camo anyone?