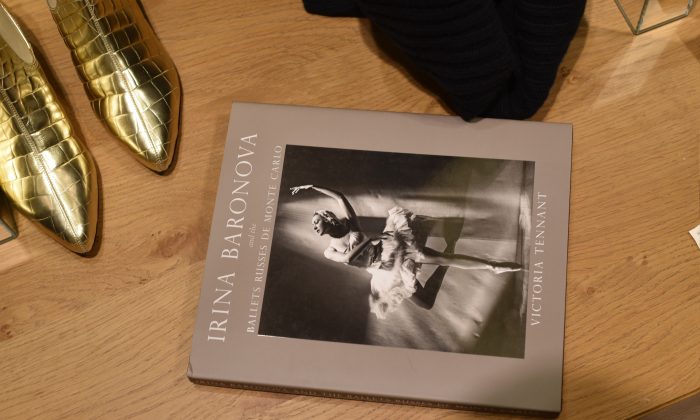 Despite the nearly full moon, stars were out on Rodeo Drive in Beverly Hills Nov. 7 as luxury Italian fashion house Max Mara hosted an event in honor of the arts.

Actress Victoria Tennant was the guest of honor in celebration of the launch of her book Irena Baronova and the Ballets Russes De Monte Carlo.

The book is an elegant pictorial chronicle, including letters, posters, and narration, of the author’s renowned mother, Irena Baronova, chosen to be a prima ballerina for Swan Lake at the tender age of 13 and, throughout her career, brought ballet to America and the rest of the world.

Ms. Tennant, who is also an Emmy and Golden Globe award nominee, said that her grandparents escaped the Russian Revolution and lived in tenements behind factories in Hungary and Romania trying to save money. Despite the poverty in which they lived, Ms. Tennant’s grandparents still managed to provide ballet lessons for young Irena.

“Somehow, cleaning offices at night and working in the factory doing engraving by the light of a candle, it took a year and my grandfather saved up enough money for three third-class train tickets from Romania to Paris where he took [Irena] to see a great [ballet] teacher who said, ‘I’ll take her. I know you can’t pay me. I know you are penniless.'”

A couple years later, Irena was chosen to be in a ballet company, where she took the leading roles amidst other dancers who, like her, would eat, breathe, and embody dance as an art form.

Ms. Tennant waxed poetic and was even a bit profound when she commented about the dancers’ genuine passion.

“All the great artists in this book spent their life doing what they loved. They never thought about making money. They wanted to do what they loved doing. Some of them were very successful, and some of them just got by, but all of them owned their days. They woke up in the morning, and their days belonged to them.

“There are photographs in the book of the dancers on the beach—on their days off they would go to the beach—they were still dancing—photographs of those men and women in their bathing suits doing incredible jumps and leaps. They can’t stop dancing.”

She hopes that her book will become a movie, and she already has a name for it: Baby Ballerina.

Close family friend of Ms. Tennant and renowned filmmaker Mike Medavoy attended the party. Mr. Medavoy has been involved in over 300 films, 17 of which have been nominated and 7 have received Best Picture Oscars, according to IMDB.

Mr. Medavoy’s wife, Irena Ferris Medavoy, gave a heartfelt introduction for the guest of honor and was not coy about her intentions.

“He [her husband] made Black Swan, so I want him to make White Swan. I’m very serious. I think [Victoria’s book] is very inspirational, and I’m going to do everything I can to bring this to the screen,” she said.

MaxMara will donate 10 percent of its sales for the week following the event to Junior Blind of America, a non-profit organization that helps children and adults who are blind, visually impaired, or multi-disabled to achieve independence.