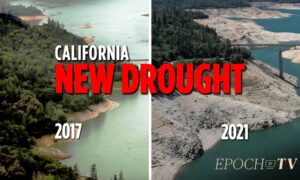 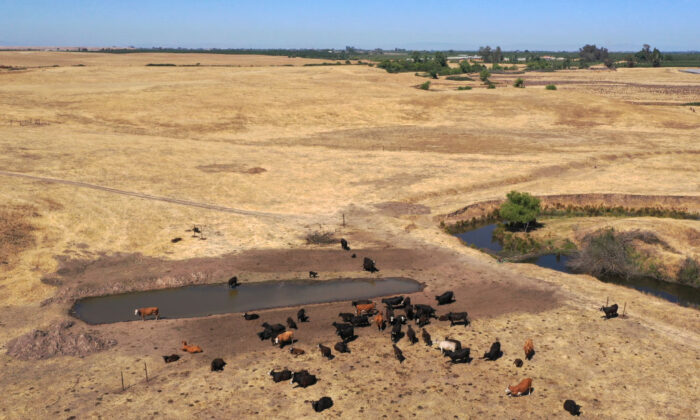 In an aerial view, cattle gather around a pond on a ranch in Snelling, Calif., on May 26, 2021. (Justin Sullivan/Getty Images)
US News

California farmers produce about two-thirds of the fruits and nuts in the United States, plus one-third of the nation’s vegetables. As of April of this year, the National Integrated Drought Information System (NIDIS) announced that more than three-quarters of the state had entered moderate to severe drought conditions.

Agriculture is an important part of California’s economy. The California Department Of Food and Agriculture (CDFA) report states that California’s exports in agricultural goods were worth $21.7 billion in 2019. Extremely high temperatures and prolonged drought led to severe water shortages, forcing farmers to choose between the high cost of planting or forgoing planting altogether.

Liu said, “I have a farm in San Diego that grows avocados. The harvest survived the 2020 drought. But this year, my avocados are dependent on irrigation because it’s not raining at all. Now, my water bill is $7,000-plus per month. This is in addition to the fixed cost of labor and fertilizer. My profits are evaporating.”

To maintain the farms’ operations, Liu has no choice but to cut down 10-year-old avocado trees to replace them with more drought-tolerant ones.

“This will cost me hundreds of thousands of dollars,” Liu said. He continued to explain that many farmers in California are facing the same dreadful losses. He can defray some of the high costs by renting land to other farmers.

Beginning in 2011, California suffered a severe drought that lasted 6 years. According to an earlier report by the United States Department of Agriculture (USDA), from 2011 to 2016, nearly 1 million of California’s 27 million acres of cropland lay fallow. During the drought, farmers relied heavily on the strained groundwater resources to get by (pdf).

Drought conditions haven’t been this bad since 2015. According to the latest update this week by the NIDIS, three-quarters of the state is currently experiencing the highest levels of drought known as “extreme drought” or “exceptional drought.”

The elevated temperatures led the accumulated snow in the Sierra Nevada to evaporate faster than the snow accumulates. This impacted downstream watersheds, including above-ground reservoirs and groundwater recharge rates, both valuable water sources for California’s farmers.

The U.S. Department of Agriculture said a team of agricultural scientists is helping California’s farmers maximize current water resources. They encourage farmers to implement optimization strategies, mainly deficit irrigation, which uses only enough water for plants to survive during drought-sensitive growth stages of a crop. Farmers may also choose to drill deeper wells to locate additional water, but it’s costly, and there are no programs to subsidize the cost for farmers.

Approximately 40 percent of California’s farmlands rely on irrigation (some of that water from wells), yet Liu said that many wells have run dry. “Some farms have to re-drill their wells. One of my wells is 500 feet deep, which used to be deep enough to pump water, but now it is not.”

Liu also said there is a “seasonal river” nearby one of his farms in Los Angeles County. In past years, water would flow down from the mountains for a few months whenever it was raining or snowing to replenish the aquifer and nearby wells. “Now the flow is completely cut off this year, and we have no water at all.”

Liu said that California farms also faced difficulty hiring people during the pandemic, so farmers had to increase pay to find people willing to work. Now, with this severe drought, additional labor costs, and increasing fertilizer costs, he is not optimistic about next year’s profits.

“A reduction in harvests and income is an absolute certainty,” he said. “Farmers are lucky if they can break even.”