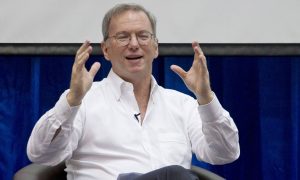 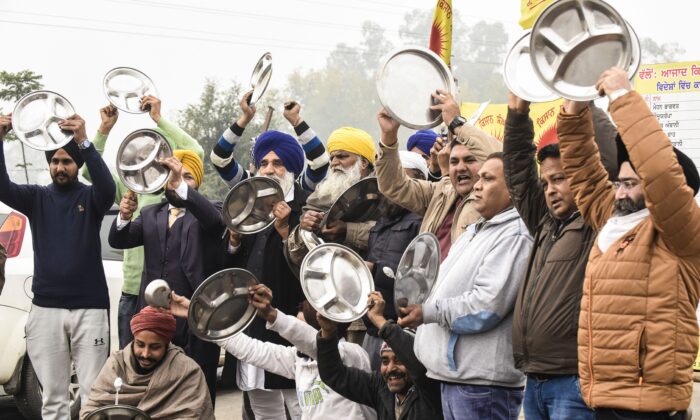 Farmers beat utensils during a protest against the central government's recent agricultural reforms as India's Prime Minister Narendra Modi addressed the nation on the monthly radio programme 'Mann Ki Baat', at the Toll Plaza, on the outskirts of Amritsar on Dec. 27, 2020. (Narinder Nanu/AFP via Getty Images)
India

NEW DELHI—As a protest by India’s farmers against new reforms entered its sixth week, a kind of ecosystem has developed at the encampment site on the outskirts of New Delhi, where thousands of farmers are staying with their tractor-trolleys, pitched tents, and open kitchens. Meanwhile, netizens are aggressively and openly debating about the measures.

Such a situation, when opinions sharply differ but those holding them can coexist, is symptomatic of a functional democracy, experts say.

“This is what democracy is: chaos, discussions, debates, and in the end, consensus, not diktat,” Aparna Pande, a research fellow and the director of the Initiative on the Future of India and South Asia at the Washington-based Hudson Institute, told The Epoch Times.

“Democracies are chaotic and so I don’t see this hurting India’s image. However, India has a large diaspora that is active and integrated into the countries they live in.” The upside of a big diaspora is they help India and its image, the downside is that countries around the world and governments will be interested in what is happening in India.

The protestors have urged members of Parliament (MPs) in the United Kingdom to ask Prime Minister Boris Johnson not to visit India until their demands are met. Johnson is scheduled to visit New Delhi on Indian Prime Minister Narendra Modi’s invitation to be the chief guest at India’s Jan. 26 Republic Day celebrations.

In response, Tanmanjeet Singh Dhesi, a Sikh MP in the British Parliament, asked Johnson to convey to Modi the “the heartfelt anxieties of our constituents” when the two meet in New Delhi.

Seven lawmakers in the U.S. Congress, among them six Democrats and a Republican, also wrote to Secretary of State Mike Pompeo, asking that he address the matter with the Indian administration.

India called remarks by foreign leaders and lawmakers about the farmers’ protests “ill-informed” and “unwarranted,” and said it’s an internal issue.

The protesters are objecting to reforms that Modi enacted in late September to deregulate India’s agricultural industry and provide the farmers with more autonomy to sell their goods to independent purchasers, rather than to government-sanctioned buyers.

Experts said the reforms are actually needed and what is happening is a challenge often seen whenever a government in a functional democracy tries to enact mass reforms.

“Agricultural reforms are needed, and the basic principle behind the reform is good. The problem as always with reforms is building consensus before you undertake massive reforms. Maybe a pilot project should have been started first,” Pande said.

“In a state like Bihar, which abolished APMCs [Agricultural Produce Market Committee] years ago but no corporates go there, why would they go to states like Punjab and others,” she said, noting the concern of protestors who fear the reforms will lead to the hijack of the market by corporate entities.

APMCs, which were established under the APMC Act of India, operate under the country’s state government. These committees help regulate a Minimum Support Price (MSP) and ensure payments are timely to the farmers through auctions in the APMCs.

Before the current reforms, the farmers could sell their crops only in the markets of the APMCs. However, these markets started to lose their sheen in the 1990s because they couldn’t keep pace with a significant increase in the amount of produce, and states like Bihar opted out. Other states such as Uttar Pradesh, Madhya Pradesh, Gujrat, and Karnataka have already relaxed some regulatory aspects of the APMC laws.

Pande said corporate houses are profit-driven and would mostly be interested in commercial crops such as cotton and jute.

“Why would a corporate entity even want to produce foodgrains, there is no money in that,” she said, adding that India also needs to ensure that foodgrains are produced, purchased at a certain price, and stored for delivery to the poor.

Professor Madhav Nalapat, a New Delhi-based strategic analyst, told The Epoch Times that he sees a need for more changes that will provide Indian farmers with more professional choices, whether in agriculture or other endeavors.

“The problem that I’m seeing is that they are planting crops that people don’t want to eat anymore, and maybe they can make more money by planting different types of crops,” he said.

“Conditions change and new opportunities emerge, but often regulation prevents people from shifting as they block the new opportunities. For example, computers were opposed for years by many political parties as was doing airline and rail reservations through the internet. There’s still opposition to e-commerce among those who believe it will harm their interests. Outdated regulations help those who are resistant to change.”

Further decentralization and deregulation—a process that the country started in the 1990s to empower elected local self-governments in rural and urban areas—are needed, Pande said.

“Why is it that the urban areas, as well as the village panchayats [local self-governments], have less money and less control on what they can spend and how they can get taxes than they did in the 1990s?” Pande said. She said decentralization genuinely works when the local self-governments and the states have the power to adapt a wider law to their specific contexts.

While “genuine decentralization” is challenging, it’s a dire need in the Indian governance system. she said. India is a big country with varied geographical, climatic, and agricultural crop cycles, and resources; reforms are needed but they need to be decentralized to allow states to work out specific solutions, she said.

“I am in favor of decentralization of decision-making. And I trust the citizens in India to be as sensible as citizens anywhere else,” he said.

By genuine deregulation, he means a “system that is neutral between players and transparent.”

“Even if deregulation takes place on paper, sometimes vested interests seek to sabotage it in practice. Such forces need to be eliminated and this is a work in progress,” he said.

Pande says the larger application of reforms also needs to be understood in the unique Indian context, in which some Indian states produce food crops while the others produce cash crops. Those who produce cash crops are heavily reliant on food-producing states.

The Modi government has made various outreach attempts to the protesting farmers, but farmers’ unions have labeled the outreach as propaganda. They have asked the government to first include scrapping the reform laws in the agenda of the discussions.

A meeting is scheduled between the two sides on Jan. 4, although the protestors have threatened to take firm steps if the government doesn’t decide in their favor, by scrapping the three reform laws introduced in September and giving a legal guarantee for a minimum support price.

Pande said to overcome the deadlock in negotiations, a willingness to negotiate by following democratic approaches and practices is needed, adding that healthy negotiations would mean identifying immediate needs and what can be achieved gradually within specific time frames.

She said this gradual application of reforms is also essential because there can be “no one answer” for all Indian states where climate, irrigation facilities, soil types, and land productivity vary drastically from each other.

Nalapat expressed optimism that the deadlock in negotiations will be eventually settled.

“Farmers are a treasure for the country, and it is certain that the deadlock will be resolved, although in India, matters sometimes take a bit longer than in some others,” he said.