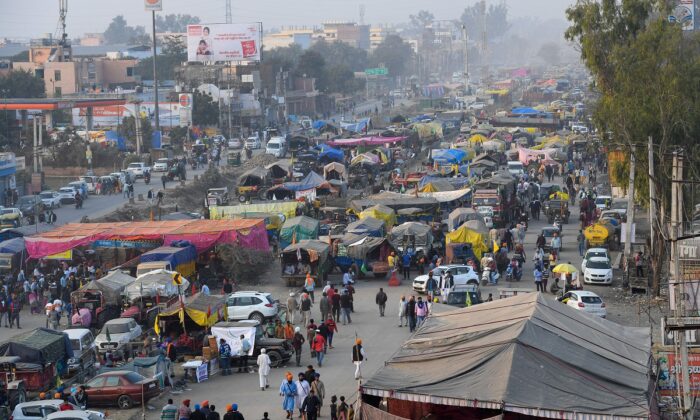 A general view of parked tractor trolleys and trucks of protesting farmers is pictured along a blocked highway during a demonstration against the central government's recent agricultural reforms at the Delhi-Haryana state border in Singhu on December 10, 2020. (Prakash Singh/AFP via Getty Images)
India

NEW DELHI—Farmers are protesting by the thousands on New Delhi’s border, to demand the repeal of an air quality measure that, among other things, penalizes the burning of agricultural stubble, a major cause of air pollution in India’s national capital region.

Meanwhile, protests over the pollution caused by the massive annual burning of husks in the northern state of Punjab, and the resulting public health crisis that is affecting so many lives, are deeply rooted in the country’s socialist agricultural policies that the current government is trying to change, according to an analyst.

The protests started on Nov. 26 against legislation that Prime Minister Narendra Modi enacted in late September to deregulate India’s agricultural industry and to provide the farmers with more autonomy to sell their goods outside the government-sanctioned buyers to independent buyers.

The government-sanctioned markets were a major feature of India’s Green Revolution supported by the country’s socialist policies in the 1970s, which converted the country from a food-deficit society dependent on international aid to a wheat-and-rice-surplus country dependent on subsidies and centralized markets, Abhijit Iyer-Mitra, a senior fellow at the New Delhi-based Institute of Peace and Conflict Studies and a former visiting fellow at the Washington-based Stimson Center, told The Epoch Times.

Modi’s government is now trying to open the market and suggesting “two parallel systems” that allow both centralized and open markets to coexist, according to Iyer-Mitra. He suggests that the protesters’ demands aren’t solution-oriented, as they “want to make resolution impossible.” The government, on the other hand, is unable to come up with creative solutions.

So why are farmers demanding the repeal of an act that improves air quality?

“In the 70s, socialism was centralized planning, which meant, ‘Let’s grow rice here where wheat is traditionally grown,’ without thinking why only wheat was grown and not rice. And like all centralized planning, it leads to cock-ups and ecological disasters like crop burning,” Iyer-Mitra said.

“You have enough examples of this in the Soviet Union and China as well. What happened is these problems went on compounding.

“Now what you see is, even though those problems have compounded, the response to all of this is small fixes on the ground that don’t work. You have created a macro problem because of central planning. Now, you are micro-planning the fixes. You are basically micro-managing the fallout.”

In addition, socialism has created dependency, and people don’t want to get out of it, he said.

In the 1970s, India’s socialist policies led to centralized agricultural markets. Sustained by subsidies, farmers began producing a surplus of rice and wheat in what became known as the Green Revolution. Farmers started to grow multiple crops annually, and the dependence on subsidized fertilizers greatly increased.

Farmers in the state of Punjab grew a monsoon paddy crop that produces a husk after the rice is extracted, then followed it with a winter wheat crop. The government schemes increased the crop yield. That also led to farmers having to burn the rice husks to quickly prepare the fields for a subsequent wheat crop, Iyer-Mitra said.

“So, sometime in the ’80s, they shifted to a very unusual crop growing season of rice, which fell bang between the southern and northern monsoons,” he said.

“What happened because of that was that it created a sort of air vacuum, where the polluted air won’t go anywhere, it won’t be pushed out to sea by monsoon rains, or the particulate matter won’t be settled by rains.

“So, no rain, no wind; it forms a sort of pollution trap.”

The crop-residual burning led to an environmental disaster, he says, because the burning period fell right in the intersection period of monsoons from off the southwest coast and winter monsoons that enter India through its northwestern borders.

If this wasn’t enough to aggravate the situation, lower temperatures in winter created a more stable atmosphere, causing pollutants to remain suspended in the air longer.

Research published in the Annales Geophysicae a decade ago said that farmers openly burned the residual crops in Punjab “on account of high labor wages” and due to the “anxiety to collect and market the crop at the earliest” time, as they had an interval of only 15 days before the planting of the next crop.

“Punjab state straddles India’s border with Pakistan and is often referred to as the country’s ‘breadbasket’ because it produces two-thirds of the country’s food grains. A vast cloud of smoke engulfs the Punjab state, India, during October–November, as farmers burn the stubble of freshly harvested rice,” the 2010 study states. “The size of the crop area also makes stubble burning a serious problem as more than 17 million [metric tons] of rice stubble are burnt each year.”

Fast forward to a decade later and the stubble burning continues. Iyer-Mitra said the smog resulting from this burning extends over the entire Indo-Gangetic plain, which is the most densely populated region in India. He said he’s witnessed smog as far away as the city of Nagpur, which is 672 miles from Delhi.

“Recently, in 2019, the global air quality report showed that 14 out of the 20 most polluted cities in the world are from India with the most polluted being the city of Ghaziabad in Uttar Pradesh (U.P.). Greater Noida and Delhi were ranked the 5th and 9th on the list,” the study states.

All three cities fall into the “air vacuum” that Iyer-Mitra mentioned.

The air quality has led more people to migrate, particularly during severe smog episodes, and has affected tourism in Delhi, which fell in 2018 by 25 to 30 percent as a result, according to the Environmental Advances study.

“The impact of stubble burning may increase in the coming years with the increase in population and food demand,” the study states. Food production in India is slated to increase by 45 percent by 2050, it says.

Indian President Ramnath Kovind notified the commission for Air Quality Management in the National Capital Region and adjoining areas of an ordinance on Oct. 24 to manage air pollution and direct state governments to initiate criminal proceedings against stubble burners, which could include a fine of $135,445 and a jail term of five years.

Of the three states that are part of the national capital region, Uttar Pradesh and Haryana welcomed the decision to set up a commission for air quality management, while officials in Punjab and farm bodies termed the move as “anti-farmer,” the Indian daily newspaper Hindustan Times reported.

“The central government has failed to give compensation to farmers for stubble management as mandated by the Supreme Court. Now, the new ordinance has been enacted to arm-twist the hapless farmers,” said Balbir Singh Rajewal, president of a faction of Bharatiya Kisan Union (Indian Farmers Union) and a former member of the Rajya Sabha, or the upper house of the Indian Parliament.

“There is no infrastructure to store 160 lakh tonnes of stubble, which is almost equivalent to the paddy crop of a single season.”

Iyer-Mitra says the Supreme Court has been “dithering” over the matter of stubble management, and that the marginalization of small farmers in itself is a direct effect of the Green Revolution.

“[The] Delhi high court, on October 8, 2016, compelled the states of Uttar Pradesh, Delhi, Punjab, Haryana, and Rajasthan to execute an exhaustive policy to curb the issue of outdoor stubble burning at their respective provinces. Following this directive, the above states immediately enacted strict policies including fines on the burning of any stubble in their respective states,” according to the Environmental Advances study.

“In 2017, the Punjab government distributed direct seeders to many farmers which helped in easily incorporating the paddy straws into the soil. The government also proposed to reduce the cultivated area for paddy farming by about 7 lakh acres by 2020, which is about 10% of the total paddy area cultivated in 2019.”

Despite these state-level ordinances, Punjab’s government representative has called the Modi government’s ordinance “ridiculous,” according to the Hindustan Times. However, the Punjab government itself took action last year against 2,923 farmers in 20,729 cases of stubble burning reported by Nov. 1, Indian political magazine The Week reported.

Iyer-Mitra says this contradictory situation is due to a lack of enforcement of existing ordinances; he blames that on a lack of “political will” and a widespread culture of micromanagement in India.

“Micromanaging policy is not the same as enforcement,” he said.

“On top of that, whatever good that existed, socialism has destroyed it. When the British left us the courts and an education system, it wasn’t a quantity system. It was a quality system and they functioned fantastically well. And then the First Amendment comes and it destroys the right to property and all of that.

“The moment you destroy the property, it goes the same way that Zimbabwe does with all the land seizures or all that the Soviet Union does.

“Sadly, everything is wrong and the problems are just compounding, whether we like it or not.”