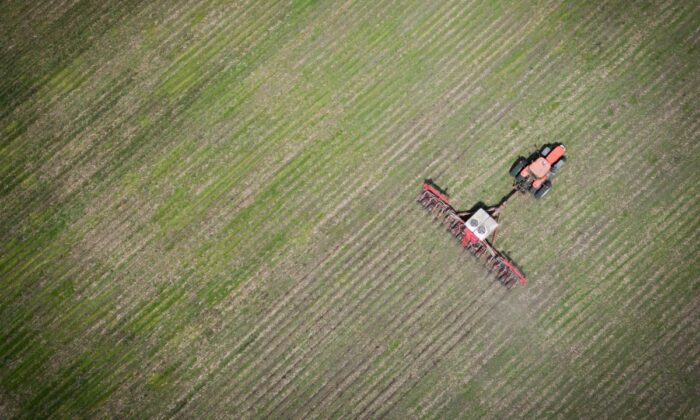 Farmers Paying Triple for Fertilizer: We’re Not the Ones Raising Food Costs

Beep. Beep. Beep. It’s the familiar sound of food being scanned and placed into bags at your local grocery store. You just went in for a few things and meant to keep it under $100. But you walk away with a new case of sticker shock and fewer bags than $100 used to buy.

Inflation has hit every link of the food chain, such as diesel that fuels tractors in the field, and the trucks that deliver food from farm to the processor, to the warehouse, and then to the retail store.

Another cost that’s affecting your grocery bill is a major jump in the price of fertilizer. Farmers are paying roughly three times what they paid in 2020.

“I think folks tend to forget—I hear the mainstream media talking a lot about it—the cost of farming went up, and you’re going to see that in the grocery store,” Iowa Corn Growers Association President Lance Lillibridge told The Epoch Times. “Well, that points the finger at the farmer, and that’s very frustrating because the farmer, we don’t set the price for our corn, or our beans, or cattle, or hogs, or chickens. We don’t set the price of fertilizer.

“We buy at retail; we sell at wholesale. It’s always been that way. Farmers are some of the most frugal people. They’re extremely smart. And we will manage to work through this. But sometimes we don’t. Sometimes people go broke, and it’s not a good thing. But what the consumer has to remember is that farmers are not setting the price. So when that box of Wheaties or corn flakes goes up in the supermarket, it’s not because of the farmer.”

“Experts estimate that without fertilizer, we would be without 50 percent of our food supply,” Kathy Mathers, vice president of public affairs at The Fertilizer Institute, told The Epoch Times. “Fertilizer is absolutely necessary for plant growth. If farmers don’t get it, they are not going to be able to grow the crops we need to eat.”

It’s common knowledge among agriculturalists that soil health depends on three vital macronutrients found in fertilizers: nitrogen, phosphorus, and potassium. These macronutrients leave the soil as they feed growing plants, so farmers must replenish the soil to keep it fertile.

“It’s a serious situation, because a sizable amount of macronutrients come from offshore, from either Canada, Russia, or the Middle East, and so we’ve got to be careful in what the long term supply issues look like,” Dennis Campbell, a farmer in Clinton County, Iowa, told The Epoch Times. “Like most farmers in the last 100 years, we’re interested in the longevity of our soil, so we’re not going to steal fertilizer from the dirt and not replenish it.”

Campbell farms and fertilizes mostly corn and soybeans on 9,000 to 10,000 acres each year, including some of his own land and some contract work.

A year ago, Campbell bought nitrogen fertilizer for 30 cents a unit. Today it’s over $1 per unit.

When multiplied by 10,000 acres, Campbell would be paying an additional $1.5 million this season if he hadn’t bought in advance. Many farmers buy fertilizer in the fall for fall application or to capture a lower seasonal price.

As fertilizer costs climb, farmers must decide how much they can afford. The result may be less food produced.

“We’re trying to maximize yield to get maximum dollars,” Campbell said. “At some point, as those three macronutrients go up, there’s going to be a tipping point where we’re going to have to be willing to take a lower yield and say, ‘I’m going to take the risk of being short, or nutrient deficient on potash, for example, because it’s too expensive for me to get to what I think I need to maximize yields.

“Finding that fine balance is going to be a challenge.”

Between 2001 and 2016, the U.S. lost 11 million acres of farmland to development, according to a report from the American Farmland Trust.

With the average age of the U.S. farmer at 57, farmland will be lost as they retire.

“We have data showing 336 million acres of farmland is going to change hands in the next 15 years, and that’s something we’re really concerned about,” Don Buckloh, spokesman for the Farmland Information Center, told The Epoch Times. “With the change of hands, what’s not known is, who’s going to operate it?”

Retiring farmers could pass their land on to another farmer, or a developer. As farmland shrinks, U.S. and world populations grow. Census data shows the population in the United States has increased from 151 million people in 1950 to 331 million in 2020.

“Thanks in part to fertilizers and somewhat due to the fact that we have better seed varieties, growers are growing twice as much corn as they grew in 1980, with about 6 percent more fertilizer,” Mathers said.

“When a producer looks at his input costs, like fertilizer, we have to make some decisions: Does my land benefit from a production and an environmental standpoint?”

Campbell notes that Ukraine’s planting season is weeks away. He assumes most farmers there may have fertilized in the fall, but the decision to invest in planting is surely a difficult choice for Ukraine farmers now.

“I mean, why would you put that money out there when you think that there could be a bomb or a tanker, or somebody is going to steal your diesel?” Campbell said. But he says tariffs are the main culprit of increased prices.

Fertilizer was already on the rise before Russia, a major fertilizer producer, invaded Ukraine.

Last year, the International Trade Commission, at the request of fertilizer producer Mosaic Co., put a tariff on phosphate fertilizer from Moroccan producer OCP Group, and duties on phosphorus imports from Russia. Since then, fertilizer prices have jumped.

The American Corn Growers and other agriculture groups are asking for those tariffs to be removed.

Farmers typically plan ahead. Those who fertilized in the fall won’t feel the pinch so much this spring. But they’re worried.

“For those buying fertilizer strictly in the spring, it’s going to be tighter margins,” Ryan Drollette, farm management specialist for the Iowa State Extension, told The Epoch Times. “People are thinking that this might become a real problem if it keeps going.”